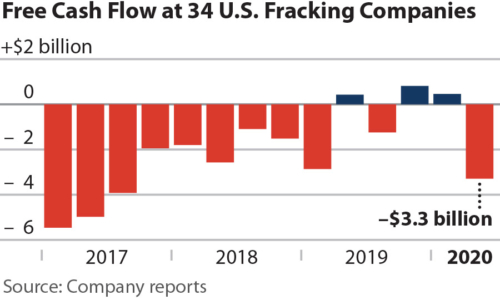 September 15, 2020 (IEEFA)— A cross-section of 34 North American shale-focused producers continued a long-term losing streak in the second quarter of 2020, spending $3.3 billion more on drilling and other capital projects during the quarter than they generated from selling oil and gas. Low prices and declining sales volumes slashed revenues, leaving the fracking sector awash in red ink despite steep cuts in capital spending.

An analysis by the Institute for Energy Economics and Financial Analysis (IEEFA) released today found the fracking companies have cumulatively outspent their operating cash flows by $29 billion since 2017. They cut capital investment by 45 percent from the previous year, down to levels that hadn’t been seen since the oil price collapse of 2016.

“In financial terms, companies in the center of the U.S. fracking boom have been performing terribly for years,” said Clark Williams-Derry, IEEFA financial analyst and lead author of the report. “But last quarter was particularly dismal, characterized by low prices, falling revenues, collapsing investment, and declining investor sentiment.”

The analysis was based on the first data available since the coronavirus pandemic caused oil and gas demand to plunge in early March. Yet the industry’s poor financial performance predates the global economic slowdown. Energy (which excludes renewables) has been the worst-performing sector in the S&P 500 index since 2010; prices fell 37% through the first half of the year, even as the overall market has dropped only 4%.

More bad news is on the horizon. The law firm of Haynes & Boone has tallied 36 bankruptcy filings from the beginning of 2020 through late August, involving more than $50 billion in debt, and industry analysts anticipate more failures in the months to come. Meanwhile, revenues for the companies in the IEEFA analysis have plunged $21.3 billion from the previous 12-month period, from $33 billion to $11.7 billion.

While fracking has led to a boom in U.S. oil and gas output, it has consistently burned through more cash than it has produced. The latest results confirm that fracking continues to be a high-risk enterprise with a poor track record, weak financial fundamentals, and an unproven, speculative business model.

The Institute for Energy Economics and Financial Analysis (IEEFA) examines issues related to energy markets, trends and policies. The Institute’s mission is to accelerate the transition to a diverse, sustainable and profitable energy economy.