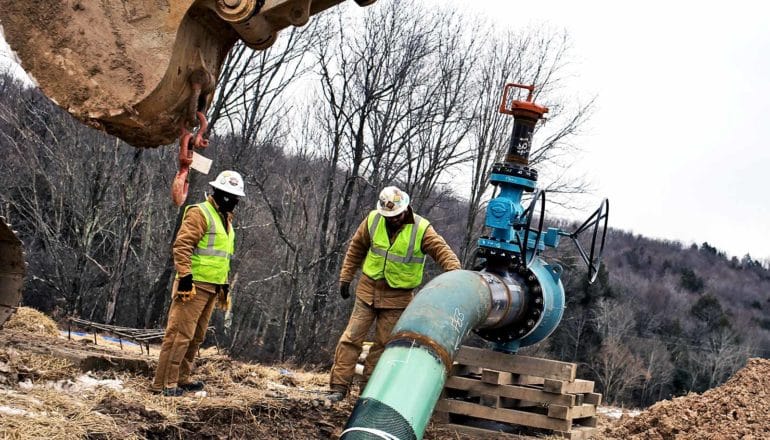 A new approach to managing the risk of earthquakes from fracking could let regulators stop in time to prevent nuisance and reduce the risk of property damage and injury, say researchers.

The approach centers on a calculation of the risk that surrounding communities will feel the shaking that a project triggers—long before earthquakes grow large enough to do harm.

Fracking, or hydraulic fracturing, involves pumping fluids at high pressure into wells drilled down into and across rock formations thousands of feet underground.

The pressure creates small earthquakes that break the rock, forcing open existing fractures or creating new ones. Petroleum then flows more easily out of the cracked rocks and into the well.

“The goal is to make many tiny earthquakes, but sometimes they are larger than planned,” says William Ellsworth, a geophysics professor at Stanford University’s School of Earth, Energy & Environmental Sciences (Stanford Earth) and coauthor of the paper in the Bulletin of the Seismological Society.

By taking the local risk of nuisance-level shaking as its starting point, the new strategy contrasts with the current common practice for managing fracking-related quakes based on size.

Under a system known as a traffic-light protocol, operators have a green light to proceed as long as earthquakes remain relatively small. Larger earthquakes may require an operator to adjust or stop work.

“Implicitly, I think regulators have had risk in the back of their mind,” says coauthor Greg Beroza, a geophysics professor at Stanford. “But risk-based frameworks have not been used previously—perhaps because it requires a bit of extra analysis.”

Earthquake size offers a rough proxy for expected damage, and offers a measure that regulators and operators can monitor in real-time. The problem: quakes of the same size can present very different risks from one location to another due to differences in population density.

In addition, geological factors including earthquake depth, fault geometry, and local soil conditions can influence how an earthquake’s energy—and potential to do damage—becomes amplified or peters out as it travels underground.

All of this context is key to honing in on a tolerable amount of shaking and establishing traffic-light thresholds accordingly.

“Areas such as Oklahoma, with buildings that were not designed to resist strong shaking, or areas that anticipate amplified shaking due to soft soils, can account for their community needs with this approach,” says coauthor Jack Baker, a professor of civil and environmental engineering who leads the Stanford Center for Induced and Triggered Seismicity with Beroza, Ellsworth, and geophysicist Mark Zoback.

The researchers developed mathematical techniques to account for the web of risk factors that shape the probability of an earthquake generating noticeable or damaging shaking in a specific location.

“Often, the biggest earthquakes happen after you’ve turned off the pumps.”

They built upon these techniques to make a translation to earthquake magnitude. This allowed them to create guidelines for devising new traffic-light protocols that still use earthquake size to clearly delineate between the green, yellow, and red zones, but with much more tailoring to local concerns and geology.

“If you tell me what exposure you have in a certain area—population density, site amplification, distance to towns or critical infrastructure —our analysis can spit out numbers for green-, yellow- and red-light thresholds that are fairly well informed by real-world risks,” says lead author Ryan Schultz, a PhD student in geophysics.

Reducing risk of earthquakes from fracking

The analysis also makes it possible, he says, to start out with some level of risk deemed tolerable—say a 50% chance of nuisance-level shaking at the nearest household—and calculate the maximum earthquake magnitude that would keep risk at or below that level.

“This is about making it clearer what choices are being made,” Schultz says, “and facilitating a conversation between operators, regulators and the public.”

In general, the authors recommend setting yellow-light thresholds approximately two magnitude units below the red light. According to their analysis, this would result in 1% of cases jumping from the green zone straight to red.

“If you stop the operation right at or before the threshold for damage, you’re assuming you have perfect control, and often that’s not the reality,” Schultz says. “Often, the biggest earthquakes happen after you’ve turned off the pumps.”

The Stanford Center for Induced and Triggered Seismicity (SCITS) supported the work.