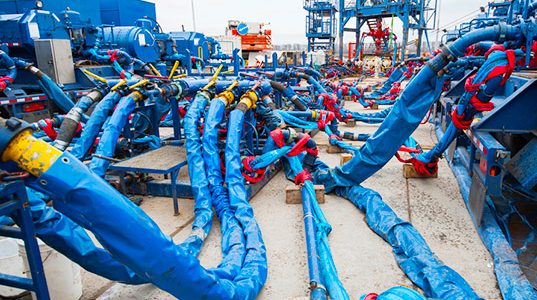 (EnviroNews World News) — Pawnee, Oklahoma — A major earthquake, caused by the underground disposal of fracking wastewater, rattled north-central Oklahoma on the morning of September 3, 2016. The U.S. Geological Survey (USGS) said the event occurred at 8:02 a.m. EST and measured 5.6 on the Richter scale. The episode officially represents the strongest oil-and-gas-caused quake ever, while taking the prize for what is likely the second or third largest manmade earthquake in recorded history, and debatably the biggest ever in the United States. [EDITOR’S NOTE: Since the publishing of this story, USGS has upgraded this earthquake to a magnitude 5.8, making it the strongest in Oklahoma history.]

The earthquake was palpable well beyond the reaches of Oklahoma, with reports flooding in from people in Texas, Arkansas, Missouri, Nebraska, Iowa, South Dakota, Wisconsin, and even as far away as Gilbert, Arizona, who said they felt the earth shake as well.

Mike Waters, Pawnee County sheriff, told NBC News no injuries had been reported and that officials were still assessing the damages on the ground.

“There are a couple buildings with light to medium damage in the city of Pawnee,” Waters said, adding the jail there had taken some structural damage.

“[Officials are also] closing some businesses in [the] downtown district since they are rather older buildings and will need to be inspected for safety reasons. One building made of sand stone had visible damage with bricks falling to the street,” the sheriff added.

To be official, the quake ties another 5.6 temblor that happened in Prague, Oklahoma in 2011 as a result of oil and gas activities. The USGS has maintained that the 5.5 El Reno Earthquake in 1952, also in Oklahoma, was due to natural causes, though the agency may be reevaluating its stance. Three earthquakes measuring 5.9, 6.1 and 6.5 are suspected to have been ignited by the oil industry in California, but the cause of those events is still undetermined. In the 60s and 70s the areas surrounding the Gazli gas field in Uzbekistan experienced three earthquakes around 7.0 in magnitude — but again, the root of those quakes remains inconclusive. But in Oklahoma in 2016, the cause is clear (more on that just below). [EDITOR’s NOTE: On Wednesday, Sept 7, Daniel McNamara confirmed with KOCO that the Pawnee quake was 10 percent stronger than the 2011 Prague temblor, upgrading it to a 5.8. The Prague event was also upgraded to a 5.7 in the same announcement.]

Several large earthquakes are suspected to have been caused by the creation of dams as well, including a 5.8 in Oroville, California in 1975. But in most of these cases, it is just that — suspicion. The official source in most of these occurrences, including Oroville, is still undetermined. But again, in Oklahoma, there is little doubt as to what caused the September 3, 2016 quake.

OKLAHOMA: FROM ALMOST NO EARTHQUAKES TO THE MOST EARTHQUAKES — FRACKING AND WASTEWATER INJECTION TO BLAME

So how is it known this large quake was caused by oil and gas activities? That’s pretty simple really: Oklahoma used to be one of the least seismically active places in the United States — but not any more. Now it is the most seismically active place in the country, and nearly all the tremors experienced there are caused by the oil and gas industry’s use of fracking and wastewater injection, according to the USGS and the Oklahoma Geological Survey (OGS).

A week long event from June 17-24 of 2015 had regulators and residents reeling as the Sooner State experienced 35 industrial earthquakes greater than magnitude 3.0 in one week.

“After years of official skepticism,” the Sooner State finally accepted that “billions of barrels of wastewater from oil and gas wells,” were officially to blame for the marked and massive increase in seismic activity, reported the New York Times.

In the past, Texas and Colorado were at the center on the debate surrounding seismic activity from fracking-related activities — but that discussion has now largely shifted to Oklahoma — the primary reason being, historically there have been almost no palpable earthquakes there at all, making it easier to observe the connection between oil and gas plunder and subsequent seismic events.

It’s important to understand this isn’t just a minuscule or questionable increase in seismic activity that is being discussed here. According to state-conducted research, widespread fracking, and fracking wastewater injection have transformed the state from a place that had an average of two tiny earthquakes a year, to the most seismically active area in the United States. In fact, the massive surge in fracking-related quakes has even alerted OGS as to the existence of many formerly stable and dormant underground faults, that it didn’t previously know existed.

Following last year’s unprecedented event, officials were in a frenzy as to what to do about the massive increase in seismic activity. Now it remains to be seen whether the state will further clamp down on the industry in an effort to quell the quakes.

(EnviroNews World News) – Oklahoma City, Oklahoma – Historically speaking, Oklahoma used to be a place where almost no palpable earthquakes happened at all – but hydraulic fracturing, a.k.a. “fracking” has changed all that now. Between the dates June 17 and June 24, 2015, Oklahoma was jolted by…

(EnviroNews World News) – Fox Creek, Alberta – More earthquakes have rattled Alberta, Canada, “from Fox Creek to Peace River [according to] experts and regulators,” The Tyee has reported, and those quakes were man-caused. What’s more, according to those same Alberta regulators, the seismic events were set off…

(EnviroNews California) – Los Angeles – Erin Brockovich is a people’s champion when it comes to battling against big industrial polluters who contaminate and poison groundwater, so much so that they even made a Hollywood movie showcasing her first amazing success story in Hinckley, California. The movie, ‘Erin…

(EnviroNews Wyoming) – Pavillion, Wyoming – A new study published on March 29, 2016, by authors from Stanford University, has linked the practice of hydraulic fracturing, a.k.a. “fracking,” to pollution of underground sources of drinking water (USDW) in Pavillion, Wyoming – a connection those same researchers say is…

(EnviroNews World News) – Since the implementation of the Dick Cheney Energy Bill in 2005, the U.S. backyard fracking boom has created some jobs, but it’s also left a trail of destruction in the wake – many of the damages are externalities, or rippling byproducts of the controversial…

(EnviroNews Idaho) – Boise, ID – An oil and gas lease auction on Oct. 15, 2014 by the Idaho Department of Lands (IDL) was delayed for about 30 minutes as protesters went back and forth with state officials concerning their right to silently protest the event. Reporters at…

(EnviroNews DC News Bureau) – Vernal – Good evening. I’m Heather Murdock reporting to you on EnviroNews USA tonight from Los Angeles, in an absolutely packed episode that is sure to be a shocker for those concerned about air quality, climate change and human health. In response to…

EnviroNews | The Environmental News Specialists © 2020. All Rights Reserved. Powered by WordPress. Designed by