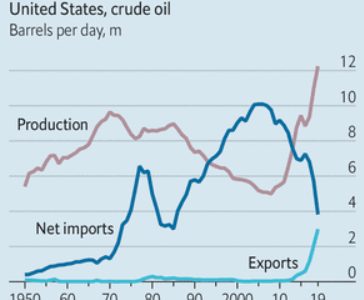 Winners and Losers If Fracking is Stopped –

…Winners and Losers If Fracking is Stopped…

Generally speaking, Saudi Arabia and Russia are winners, while Americans are losers.

A fracked well’s production declines rapidly. By the end of two years, the well is only producing at around 20% of what it produced originally. However, it continues to produce at around 10% of its initial rate for many years.

At the same time, if the US economy declines from pre-Covid GDP levels, as the result of the same policies that caused fracking to be stopped, the demand for oil will also decline somewhat, so it may only be necessary for the US to import 4 mb/d, slightly less than the decline in oil production.

It’s fair to conclude that, outside of the United States, demand for oil will only increase slightly, perhaps by 1 mb/d.

With the US importing 4 mb/d, demand for oil from outside North America will increase modestly to 5 mb/d over the next two to three years.

Increase in this demand will likely result in higher prices for oil.

Exxon, Russia and Saudi Arabia will benefit from any increase in the price for oil. BP, Shell and Total will also benefit, but to a lesser extent as they move Beyond Oil; as BP has said.

Stopping fracking will have similar results, i.e., an 80% decline in output, for natural gas production in the United States.

The US will not be able to export natural gas to Asia or to Europe. This helps Russia as they continue to become Europe’s largest supplier of natural gas. It also helps Australia and the UAE, as they are the largest suppliers of LNG to Asia.

The US will have to begin importing natural gas after about two years.

The price of natural gas at the Henry Hub is currently under $2 per Million Btu, while the price for imported LNG will be at least $6 per Million Btu.

This means Americans will be paying much more to heat their homes, and also for electricity.

Exxon has been roundly criticized for its strategy.

While the above analysis is not assured, it could be part of EXXON’s strategic thinking. EXXON could benefit from both the stopping of fracking and from a continuation of fracking.

China will be a beneficiary of America’s economic decline as it pays little real attention to climate change.

Here are two quotes from The Economist Magazine on China:

“What China lacks in oil and gas supplies it makes up for with industrial policy, which it has long been using to support domestic coal production and nuclear power as well as what is now by far the world’s largest renewables sector.”

“This is not in itself anything like a triumph for climate action. China has more than 1,000 gigawatts (gw) of coal-fired generating capacity. This installed base, with which it generates 49% of the world’s coal-fired electricity, makes it the world’s biggest carbon-dioxide emitter. And its coal use is set to expand in the years to come.”

When we flip the switch, the lights come on without anyone thinking about it. This has only been true for the last hundred years in metropolitan areas, and for only approximately eighty years in rural areas with the enactment of the Rural Electrification Act of 1936.

In 1935, only 25 percent of rural homes in the United States had electricity, and there are people alive today who grew up without electricity. Today, few people are even aware of the monolithic system that generates, distributes, and controls the electricity that flows with seeming effortlessness across the United States. This system is referred to as the grid, which is actually three grids covering the entire lower forty-eight states.

Over the past one hundred years, there have been only two area-wide blackouts affecting over 30 million people caused by a failure of the transmission system. There have been other blackouts—mostly caused by storms—affecting smaller groups, perhaps as many as several million people. Overall, the grid has worked remarkably well. Reliability can still be improved upon, but this is primarily a question of placing transmission and distribution lines underground to minimize weather-induced outages.

Suddenly, we are faced with a threat to the grid we haven’t seen before. It is a threat that can dramatically increase blackouts and the suffering that accompanies them. Some in leadership positions have viewed climate change as an existential threat to mankind and have implemented actions to eliminate fossil fuels from the generation of electricity. Some have claimed that wind and solar and other renew- ables can replace all the coal-fired, natural gas, and nuclear power plants in the United States. It can be argued that the actions these people are taking are making electricity more costly and less reliable, and placing Americans at risk for little or no reason. They are willing to gamble the safety and lives of Americans, as well as the American economy, on an ideology.

Our nation has suffered through a medical war fighting COVID-19 in which thousands died. As my neighbor said,

“The inability of our country to anticipate the corona- virus pandemic and put in place adequate reserves of all of the things we needed—PPE, ventilators, masks, tests, hospital beds, etc.—speaks loudly and directly to the need for reliable on-demand electricity and the need to plan for it right now.”

Imagine if Americans had to suffer through rolling blackouts while quarantined at home during a future pandemic. How would newly erected emergency hospitals operate without electricity, let alone our existing hospitals without diesel fuel or natural gas to power emergency generators?

Residential use is up as workers and school children stay home.

[Demand is down] in locked up restaurants, offices and factories.

Hospitals are a different story: They consume twice as much per square foot as hotels . . . lead schools and office buildings by an even greater margin. And their work couldn’t be more vital as they confront the novel coronavirus.

There is little doubt there will be another pandemic. The only question is when. We must do what is needed to guarantee adequate and reliable supplies of electricity in preparation for the next pandemic.

President Trump recognized the vital importance of the grid when he issued an executive order on May 1, 2020, to protect the grid from foreign adversaries. He said the grid, “provides the electricity that sup- ports our national defense, vital emergency services, critical infrastruc- ture, economy, and way of life.”

There is also an ideology that threatens the grid. This book will examine how federal regulators, state governments, utility companies, and the operators of the grid themselves are imposing their beliefs about climate change on all Americans and placing the grid in great jeopardy. Unelected bureaucrats and self-imposed intelligentsia are making decisions that place all Americans in danger.

Looming Energy Crisis will show you why we must continue to use fossil fuels and why we must protect the grid from the actions of those who are imposing their personal beliefs on the rest of us. Our objective should be low-cost reliable electricity available for everyone.