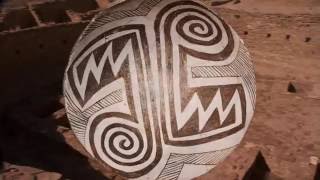 Article: Navajos Speak out on the Cultural and Biochemical Dangers of Fracking around Chaco Canyon | OpEdNews

As a member of the Navajo Tribe, the majority of my 29 years have been spent within 15 miles of one of America’s truly most sacred indigenous
sites, Chaco Canyon, especially sacred to the Hopi and other pueblo groups,
which descended from the Anasazi.

This sacred site was constructed more than 900 years ago,
as primarily a repository and residence for an agricultural priesthood
that used the archeo-astronomical observatory called the Sun Dagger to predict
the solstices, and thus the best time for planting.

If you drew a triangle between Crownpoint, Farmington, and
Cuba, New Mexico, you would be looking at the great Chaco Canyon area, which
the Trump administration turned over to the Bureau of Land Management to in
turn make available to large energy companies for fracking.

These corporations include at least: WPX Energy and LOGOS
Resources, and a Canadian company, Encana.

No one needs to belabor the well-known harmful effects of
fracking, which stem from the use of hydraulic fracturing and some very nasty
toxic chemicals mentioned in this Yale University article.

Chemicals in fracking fluid and wastewater are toxic, study
shows

“This evaluation is a first step to prioritize the vast
array of potential environmental contaminants from hydraulic fracturing for
future exposure and health studies,” said Nicole Deziel, senior author and
assistant professor of public health. “Quantification of the potential exposure
to these chemicals, such as by monitoring drinking water in people’s homes, is
vital for understanding the public health impact of hydraulic
fracturing.”

From BallotPedia, on fracking in New Mexico:

This article focuses on fracking in New Mexico
and state-specific, rather than federal, regulation of the process. The article
begins with general information about fracking and applicable federal laws and
regulations covering fracking and includes state-specific information about
where fracking occurs and state laws and regulations covering fracking. In
addition, this article includes relevant oil and natural-gas data for New
Mexico and surrounding states. While states have primary regulatory authority
over fracking, oil-and-gas operators must meet requirements in the following
federal environmental and public-health laws, among others:

The Clean Water Act, which regulates all pollution discharges into
surface waters and requires oil-and-gas operators to obtain permits to discharge
produced water–fluids used during fracking as well as water that occurs
naturally in oil- or gas-bearing formations–into surface water.

28 Responses to “Article: Navajos Speak out on the Cultural and Biochemical Dangers of Fracking around Chaco Canyon | OpEdNews”

Leave a Reply to Google