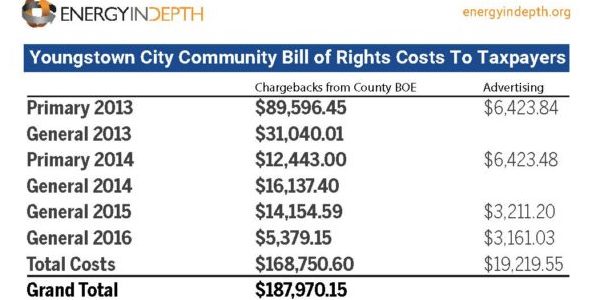 Though it’s starting to sound like a broken record, the message the people of Youngstown, Ohio are sending to fringe environmental activists who have repeatedly attempted to ban fracking in their city couldn’t be more loud and clear —they flat-out reject these outside groups’ extreme “Keep It In the Ground” agenda.

For the seventh consecutive time, Youngstown voters on Tuesday voted down a Community Environmental Legal Defense Fund (CELDF) initiative aimed at banning fracking and all fossil fuel-related activity within the city limits. Fittingly, the latest version of this initiative, labeled the “Drinking Water Protection Bill of Rights,” was voted down on the same day that an award-winning University of Cincinnati study finding fracking has not contaminated Ohio water was published in a peer-reviewed journal.

But even though the latest defeat of this initiative wasn’t even close — 56 percent voted against it, while just 44 percent voted for the measure — the activist spearheading the effort has already promised to attempt to have the initiative placed on the ballot again. Susie Beiersdorfer of the Committee for the Youngstown Water Protection Bill of Rights told the Youngstown Vindicator on Tuesday night:

“It’s not like we’re going to stop. Our motto is we don’t lose until we quit.”

While Beiersdorfer and the well-funded out-of-state activist group bankrolling this effort refuse to concede defeat, it has become clear that Youngstown taxpayers are the ones truly losing out as this unnecessary saga continues.

An EID investigation conducted last year shows that the campaign has already cost Youngstown taxpayers $187,000. And considering the Mahoning County Board of Elections indicated it was forced to send out 1,085 individual supplemental ballots to voters via U.S. Mail after the Ohio Supreme Court ruled in April that this latest so-called “Community Bill of Rights” measure must appear on the ballot, it’s safe to say that the taxpayers will eat thousands more.

Coupled with the fact that Beiersdorfer has stated that the ultimate goal of this effort is to kill jobs and push industries she and her fellow “Keep It In the Ground” cohorts don’t like out of the Mahoning Valley, it’s no wonder Youngstown business leaders applauded Tuesday’s vote and criticized Beiersdorfer’s pledge to continue this campaign.

“I’m pleased the people of Youngstown have once again rejected this ill-conceived charter amendment. I wish the anti-frackers would stop wasting taxpayer dollars, but I expect them to be back on the ballot.”

“I’m glad to see the voters made this choice again, but I’m disappointed we have to do this over and over. I wish they would take the hint, but we’ve learned by now they’re not going to.”

Which begs the question: How can Beiersdorfer and company afford to continue fighting this losing battle? The answer is simple — the effort is being bankrolled by CELDF, a deep-pocketed and extreme out-of-state activist group whose leader has stated that his group doesn’t mind bankrupting communities in the process of advancing its agenda.

In contrast, CELDF can afford to continue abusing local municipalities. Its coffers have swollen by 75 percent over the past few years, and the group has reported more than $1.4 million in assets. It is thanks largely to that sort of cash flow that CELDF has managed to brush off recent court-issued sanctions and a $52,000 fine on a pair of the group’s lawyers for “bad faith” litigation based on “implausible” and “frivolous” legal theories. Like many extremist groups, CELDF has mastered the art of fundraising, including crowdfunding efforts that raised more than $5,000 specifically to pay for failed legal actions in Youngstown.

All this noted, Tuesday’s vote will likely play out more like a recurring scene in “Groundhog Day” than a conclusion to this unnecessary saga.