The fate of Premier Brian Gallant’s Liberal minority government appeared sealed Thursday when all three MLAs from the People’s Alliance announced they will vote against the throne speech on Friday.

That would mean the Liberals will lose a confidence vote, set for Friday morning, 25-23.

Liberal hopes were buoyed Thursday morning when three Green Party MLAs said they would vote with the Liberals.

But People’s Alliance Leader Kris Austin and his two MLAs, Michelle Conroy and Rick Desaulniers, told reporters late in the afternoon they will all vote against the government.

“We are here to say collectively as a caucus, we will not be supporting this government or its throne speech,” Austin said. “We’ve made up our mind.”

After the Green announcement in the morning, Gallant had turned his focus to persuading at least one more MLA from the opposition to vote with the Liberals.

He singled out two Miramichi-area MLAs, PC Jake Stewart and Michelle Conroy of the People’s Alliance, and said they would have to explain to constituents why they’d oppose a $20 million Liberal development fund for the area that Higgs has promised to cut.

“I think the people of the Miramichi would want to continue to have those investments,” he said.

He also said PC MLA Robert Gauvin would have to explain why he’d vote against a Liberal promise to renew the $20 million Northern Fund.

“If the MLAs who have been sent to Fredericton base their votes on the content of the speech from the throne, we feel very good about our chances,” Gallant said.

Stewart and Gauvin also said late Thursday afternoon they will vote against the Liberals. 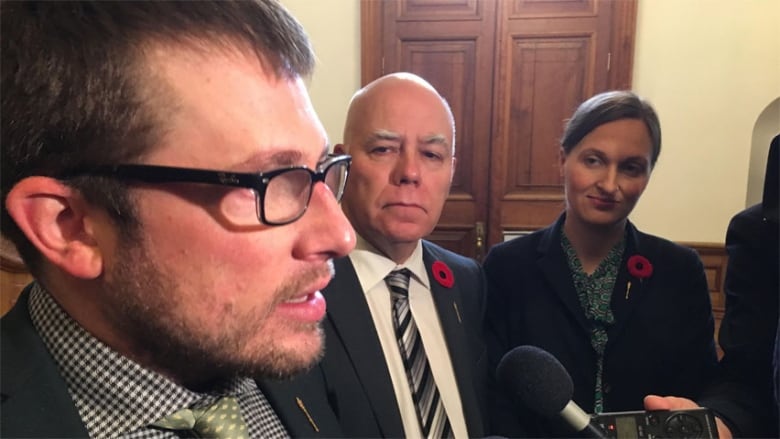 Coon did not force his two Green MLAs to vote with him. All three said they had problems with the Liberals’ last four years in power, but keeping them in office was the least-bad choice.

“I am giving the Liberals the benefit of the doubt,” said Memramcook-Tantramar MLA Megan Mitton.

Kent North member Kevin Arseneau was more critical of the Liberals, saying language tensions over ambulance delays are “directly linked to the inaction of this government.”

But he said people in his riding remain opposed to shale gas development, something PC Leader Blaine Higgs has promised to allow region by region.

Coon said that Higgs “completely lost me” on the shale gas issue.

“I told him that was a line in the sand for us, non-negotiable,” he said.

Higgs told reporters he’d already made “a very significant compromise” in vowing to lift a moratorium on fracking only in regions that want it lifted.

But Coon said another factor in his decision to back the Liberals was the PC leader’s comment Wednesday about wanting to set aside a court order requiring bilingual ambulance service in order to quickly fill vacant positions.

Coon said Higgs’s position “suggests he takes the charter rights of New Brunswick’s linguistic communities less seriously than he should.”

The Liberal throne speech, meanwhile, “contains the germs of some ideas that we believe in a minority situation we can advance,” he said.