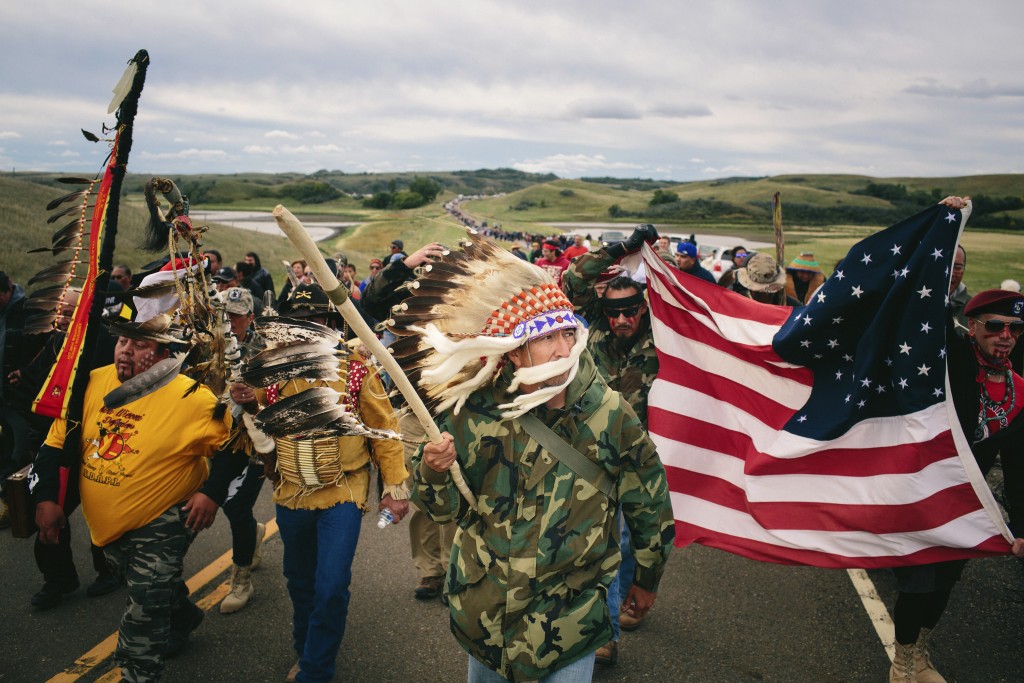 Catcher Cuts The Road leads a protest march to a sacred burial ground at the Standing Rock Reservation in North Dakota, on Sept. 9, 2016.

A growing climate consciousness has spurred popular support for a Green New Deal complete with calls for “green jobs” to aid in the transition away from fossil fuels. It’s a welcome development, but it’s also important to recognize the old labor of ecological stewardship — particularly that being carried out by Indigenous land defenders and Water Protectors.

“There’s an idea that we’re out there as paid activists. Wouldn’t that be great?” Anne Spice, a Tlingit researcher and land defender who has been living at Unist’ot’en Camp for several years while finishing her doctoral degree, said with a chuckle.

“There’s an idea that we’re out there as paid activists. Wouldn’t that be great?”

Founded in 2010 on unceded Wet’suwet’en land, Unist’ot’en Camp, some 750 miles north of Vancouver, Canada, aims to block the Coastal Gas Link pipeline, known as CGL, which is being constructed by TC Energy, the firm formerly known as TransCanada. But that’s not the camp’s only purpose: It was also founded to help bring the land and the community back to health after a period of intense logging that threatened moose hunts and salmon runs, elements of a land-based economy threatened by the oil pipeline.

“We are consistently doing the very thing CGL and RCMP” — the Royal Canadian Mounted Police — “are failing to do, which is ask for permission to enter territories and to gather and harvest,” Spice told me. It’s hard, meticulous work grounded in Indigenous culture and maintaining good relations, and not the quick techno-fixes some people are calling for in climate action.

The sort of land defense undertaken in the camp opens up a larger discussion about what “green jobs” are already being performed by Indigenous peoples to save our Earth — and the kind of value we assign to them.

Similar to how women and non-men have been historically tasked with doing the unpaid labor of housework and child-rearing, the relationship Indigenous caretakers have with the land, water, air, and nonhuman world is typically not viewed as productive. The financial, service, industrial, or technology sectors usually define what counts as a “job” — and it’s frequently bound up with polluting. Rarely is Indigenous caretaking defined as work. Yet, like unwaged caregiving work, land defense and water protection are undervalued but necessary for the continuation of life on a planet teetering on collapse.

Despite preserving the very elements needed to sustain life — such as clean air, water, and land — from settler states, repression against Indigenous peoples protecting their territories runs rampant.

This summer, wealthy Brazilian agribusiness figures intentionally burned large swaths of the Amazon, which produces 20 percent of the planet’s oxygen, to make way for cattle, farming, and mining industries. The infernos coincided with crackdown by Brazilian President Jair Bolsonaro’s government on Indigenous people and Afro-Brazilians protecting the forests. While North American settler governments have condemned the burning down of the Amazon as an affront to all humanity, they have themselves sewn the same seeds of destruction against Indigenous caretakers. 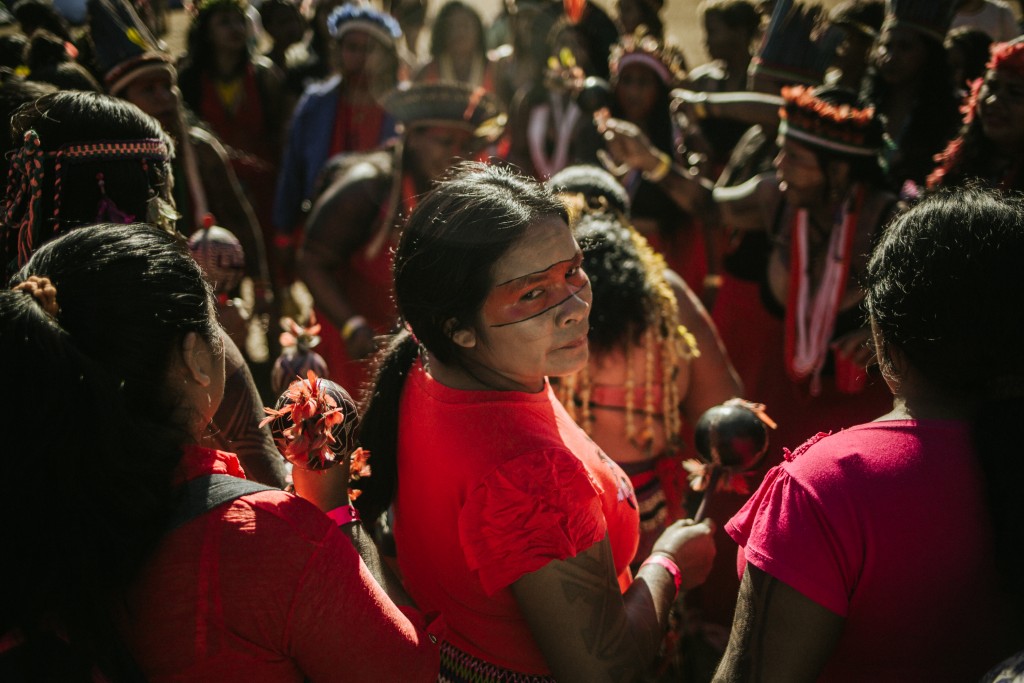 Indigenous women take part in a protest in Brasilia on Aug. 13, 2019, against Brazilian President Jair Bolsonaro’s environmental policies and the loss of their traditional settlements.

The North American oil boom, in particular, has intensified militarized assaults on Indigenous land and water in the service of protecting the expansion of oil and gas drilling, as well as pipelines.

The most spectacular confrontation with U.S. law enforcement and private security contractors occurred at Standing Rock in 2016 and 2017, when Water Protectors protested the construction of the Dakota Access Pipeline threatening Mni Sose, the Missouri River. Infrared footage of the protests captured by police drones, which was leaked by the media collective Unicorn Riot, conjures scenes familiar to the U.S. war on terror. In the video clips, tented dwellings are the only objects that distinguish Water Protectors from the horrific, but recognizable, aerial perspective of a drone stalking military-age youth in Yemen or partygoers at a wedding in Afghanistan — the collateral damage of U.S. “surgical” strikes.

Organized labor has been on both sides of Indigenous blockades. At Standing Rock, on September 3, 2016, unionized pipeline workers plowed through Indigenous burial sites with Caterpillar earthmoving equipment. It was the Saturday of Labor Day weekend, a federal holiday honoring working people who were beaten, shot, and killed to win an eight-hour workday. In an effort to break the temporary blockade, private security unleashed attack dogs on Water Protectors attempting to halt the desecration.

Not all unionized workers fought on the side of the industry. There were also members of the National Nurses United embedded with the Standing Rock camp medics, providing expertise, resources, and care — in other words, solidarity — to Water Protectors injured by chemical weapons or riot police.

“It’s important to get settler workers to recognize Indigenous land stewardship as labor in a tactical sense,” said Harsha Walia, an organizer based in Vancouver, British Columbia, who has written extensively about organized labor and Indigenous and migrant movements. “When an Indigenous blockade goes, we must recognize it as a picket line that should not be crossed.”

Walia pointed to the Mount Polley mine disaster in 2014, when a toxic process-water pond spilled into a nearby lake and river, as an example of working-class solidarities. Following the spill, Secwepemc land defenders blockaded the site to prevent miners from reopening the copper and gold mine. Walia helped liaise between the Secwepemc defenders and the miners. “These are Indigenous land defenders protecting their Indigenous economies,” she recalled telling the miners. There wasn’t an automatic affinity, she said, but there was a working-class understanding: “You don’t cross a picket-line whether you agree with it or not.” 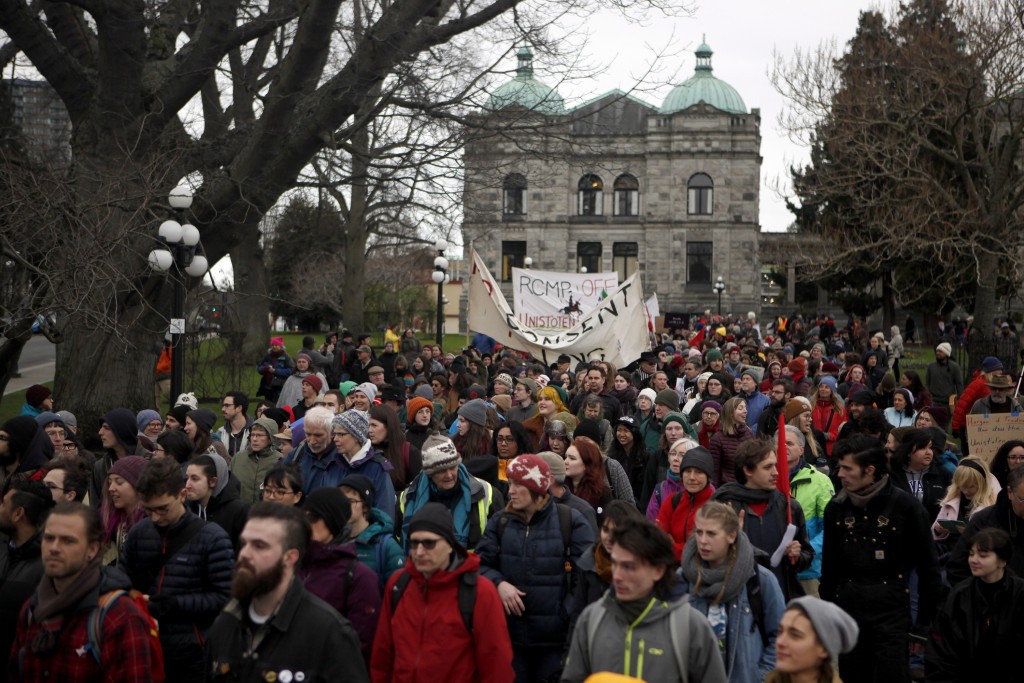 Hundreds of people gather in support of the Unist’ot’en Camp and Wet’suwet’en people during a rally at Legislature in Victoria, B.C., on Jan. 8, 2019.

We shouldn’t assume such solidarities are automatic or guaranteed. In fact, the influx of extractive workers — nearly all men — have long been decried as legitimate threats to Indigenous communities.

“We need to protect home,” said Cheyenne Antonio. She referred to a voluminous past of sexual violence used as a tool for conquest by settlers: “We’ve lived this history before.” Antonio lives in an energy sacrifice zone, an area earmarked for extractive industry with little or no other investment in the local community.

For nearly a century, her home in the Eastern Agency of the Navajo Nation has been heavily mined for coal and oil — and, more recently, for uranium and gas. Wooden oil derricks from the 1920s, pumpjacks, and modern fracking rigs dot the landscape, showing the successive waves of resource development. A new fracking boom threatens the place known as Greater Chaco Landscape, a place of origin for many Indigenous peoples in the Southwest and Latin America, and the Diné people who currently call it home.

The land is not only contaminated but also fragmented. A hodgepodge of extractive zones corresponds to a complex patchwork of legal jurisdictions in the “checkerboarded” area. In this part of the Navajo Nation, the Dawes Act, which subverted traditional land tenure systems in favor of allotting private property, parceled out land to individual Navajos and either sold off the “surplus” to white settlers or turned it into federal or state land. The fracking industry has exploited these divisions, and oil workers have exploited the loopholes of jurisdiction. This includes violent crimes against Indigenous women: According to a recent survey by a national non-profit dedicated to Indigenous health and social care, New Mexico ranked in cases of murdered and missing Indigenous women and girls, and third in the nation for oil production. Antonio can’t help but see a relationship between the statistics.

For her, there’s also a class division evidenced in the way traditional economies are devalued.“A lot of the community members are seen as too rez or too rugged,” she said. “But they know the land. They know how to protect it. They know how to survive on it. And they’re not wrong. Those ways are still alive.”

“Indigenous people are not the alternative, we’re just in the way.”

Antonio is critical of a Green New Deal; she thinks more has to be done. Her ideas go beyond sustaining current levels of energy consumption when her 90-year-old grandmother has lived without running water her entire life. “It’s easier for our Native nations and the state of New Mexico to lease land for oil and gas development than it is for my grandmother to get clean drinking water,” she said. “What is it going to take for our people to get water first before these corporations and settlers?”

Some settler governments have proposed “transition” plans that would continue extractive industry practices and fossil fuel economies while claiming to build cleaner economies. Canadian Prime Minister Justin Trudeau, for instance, has said he plans to use Canada’s oil and gas development as a way to build out a “green economy.” But some, like Anne Spice, the Tlingit researcher, see little hope in in these efforts, saying they don’t adequately address Indigenous land rights and caretaking economies.

“Indigenous people are not the alternative, we’re just in the way,” Spice said. The Wet’suwet’en territory she helped protect has been invaded by police and pipeline workers whose presence has disrupted the local Indigenous economy of hunting and gathering, which act as primary sources of food.

Coastal Gas Link, the pipeline threatening the territory, is part of the carbon infrastructure Trudeau’s government sees as a necessary step to build Canada’s low-carbon transition economy — and to achieve that goal, as of right now, Indigenous land-based economies are on the chopping block.

Both Antonio and Spice fear that if Indigenous caretaking isn’t taken seriously in current “green jobs” plans, then not much changes. “And now, we’re not only in the way of oil and gas expansion,” Spice told me, “we’re also in the way of transitioning to a green economy.”

This story is part of Covering Climate Now, a global collaboration of more than 250 news outlets that aims to strengthen coverage of the climate crisis.

The post Indigenous People Are Already Working “Green Jobs” — but They’re Unrecognized and Unpaid appeared first on The Intercept.