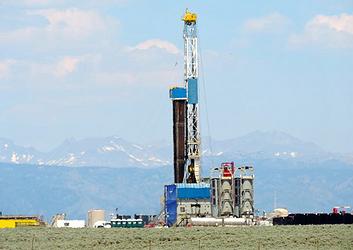 WASHINGTON, DC, March 20, 2019 (ENS) – A federal judge late Tuesday rejected the lease of certain public lands for fracking and ordered a halt to drilling on more than 300,000 acres in Wyoming until the Bureau of Land Management accounts for the impacts of such fracking on the future climate.

In his ruling, Judge Rudolph Contreras of the U.S. District Court for the District of Columbia held that the Bureau of Land Management “did not adequately quantify the climate change impacts of oil and gas leasing,” violating federal environmental laws.

Fracking rig on Wyoming’s Jonah Field, which was once undeveloped public land with sage grouse, mule deer, and elk. In the past decade, the area has been transformed by the Bureau of Land Management into an industrial zone where extensive fracking continues. July 8, 2018 (Photo by Wild Earth Guardians)

In 2016, WildEarth Guardians, Physicians for Social Responsibility, and the Western Environmental Law Center sued the U.S. Department of the Interior and the Department’s Bureau of Land Management, BLM, for failing to account for the climate consequences of leasing public lands for fracking in the American West.

More than 25 million acres of public lands in the United States have been leased to the oil and gas industry for development. More than 20 million of these acres are located in the western states of Colorado, Montana, New Mexico, Nevada, Utah, and Wyoming.

The lawsuit targeted more than 460,000 acres of public lands in Colorado, Utah, and Wyoming that were leased to the oil and gas industry in 2015 and 2016.

The plaintiffs complained that when leasing, the Bureau of Land Management refused to calculate and limit the greenhouse gas emissions from future oil and gas development.

Withholding judgment on whether BLM’s leasing decisions were correct, Judge Contreras ruled, “[The] agency must consider the cumulative impact of GHG [greenhouse gas] emissions generated by past, present, or reasonably foreseeable BLM lease sales in the region and nation.”

Under President Donald Trump, the pace of leasing public lands for oil and gas development has surged.

In 2018, nearly four million acres were offered for sale to the oil and gas industry. So far in 2019, the administration auctioned off or proposed leasing more than 2.1 million acres.

Judge Contreras’ ruling signals that unless the Department of the Interior and its Bureau of Land Management begin fully accounting for the climate costs of all oil and gas leasing in the country, the agencies will be breaking federal law, the plaintiffs say.

“This ruling is a triumph for our climate,” said Jeremy Nichols, Climate and Energy Program director for plaintiff WildEarth Guardians. “To limit greenhouse gas emissions, we have to start keeping our fossil fuels in the ground and putting an end to selling public lands for fracking. This decision is a critical step toward making that happen.”

The judge concluded, “BLM failed to take a ‘hard look’ at GHG emissions from the Wyoming Lease Sales,” and therefore the permits issued for those sales did not comply with the National Environmental Policy Act, NEPA.

“In short,” wrote Judge Contreras, “because BLM cannot fully prevent GHG emissions from oil and gas drilling once leases have been issued, BLM was required to assess the reasonably foreseeable impacts of drilling, at the leasing stage. BLM’s assessments fell short of NEPA’s requirements.”

The plaintiffs had asked the court to, among other relief, “void the issued leases, and suspend and enjoin BLM from any further leasing authorizations pending BLM’s full compliance with NEPA.”

Under the ruling, BLM must supplement the permitting documents, addressing the deficiencies he identified. But Judge Contreras declined to vacate the Wyoming leases in view of the “serious possibility” that BLM may be able to substantiate its conclusions.

But that determination does not excuse BLM from giving serious consideration to the court’s concerns. “Compliance with NEPA cannot be reduced to a bureaucratic formality,” the judge wrote, “and the Court expects BLM not to treat remand as an exercise in filling out the proper paperwork.”

“Fracked gas is dangerous for people and terrible for the climate,” said Barbara Gottlieb, Environment and Health Program director for Physicians for Social Responsibility. “This latest court win is not only a victory for our health and future, but it reinforces that the oil and gas industry doesn’t get a free pass to pollute.”

The plaintiffs maintain that while the ruling applies to Wyoming, it has implications for public lands across the American West and is “a major rebuke to the Trump administration’s anti-environment, anti-climate agenda.”

“With the science mounting that we need to aggressively rein in greenhouse gases, this ruling is monumental,” said Kyle Tisdel, attorney and Energy and Communities Program director for the Western Environmental Law Center. “Every acre of our public land sold to the oil and gas industry is another blow to the climate, making this ruling a powerful reality check on the Trump administration and a potent tool for reining in climate pollution.”