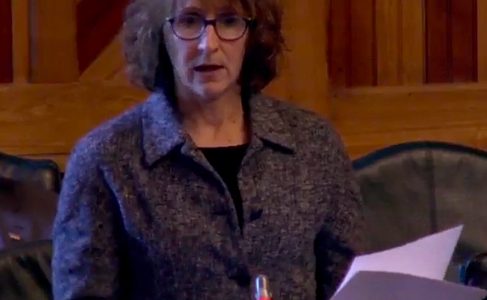 Opposition Day at the Legislature: Pay equity and fracking debated

Liberal MLA Monique LeBlanc explains Bill 4, an Act to bring pay equity to the private sector, on Dec. 13 in the NB Legislature.

After the recent provincial election resulted in a historic four-party minority government, the NB Media Co-op stated it would write stories about decisions made in the new Legislature that impact those ignored or misrepresented in the corporate media. Some of these stories will cover Thursday afternoons, informally designated “Opposition Day.” Bills introduced by the Opposition parties will be debated only on Thursday afternoons when the Legislature is in session. Other days are reserved for Government bills and other business.

Pay equity bill and amendment both fail to pass

On Thursday, Dec. 13, two Opposition bills were given second reading. The first, Bill 4, An Act to Amend the Pay Equity Act, 2009, was introduced by Monique LeBlanc, Liberal MLA for Moncton East. Bill 4 extends pay equity legislation to private sector employers with 10 or more employees. Given that the PC Government opposed the Bill at its first reading, LeBlanc introduced an amendment to suspend the bill’s second reading and send it to a standing committee to conduct more consultation with stakeholders.

MLA Sherry Wilson, the Minister responsible for women’s equality, at first stated her support for the amendment because more consultation was needed. However when the vote was taken, Wilson voted against it, along with all the PC and People’s Alliance (PA) MLAs. The Liberals and Greens all voted to support it. Both the amendment and the bill failed to pass.

Five women MLAs voted against the bill and amendment. If only two had voted for instead of against, the bill would have passed and women working in the private sector would now have their right to pay equity upheld. The women voting against were PA MLA, Michelle Conroy, Miramichi; and four PC MLAs: Sherry Wilson, Moncton South-West; Dorothy Shephard, Saint John Lancaster; Andrea Anderson-Mason, Fundy-the-Isles Saint John West; and Mary Wilson, Oromocto-Lincoln-Fredericton.

Johanne Perron and her colleagues from the NB Coalition for Pay Equity were in the Legislature gallery for the vote. After the bill was defeated, the Coalition issued a statement expressing its disappointment. “We denounce that the right to pay equity is denied to workers in the private sector, without even allowing for consultations. It was a great opportunity for collaboration and we had hoped that pay equity would take precedence over partisan considerations,” said Coalition Chair Frances LeBlanc.

The NB Media Co-op reported on a protest in Moncton on Nov. 15 to signal opposition to the threat by the PC government to lift the moratorium on fracking. On Nov. 28, MLA Brian Gallant, Leader of the Opposition, introduced Bill 3, an Act to Amend the Oil and Natural Gas Act. Bill 3 would keep the current moratorium on shale gas in place by making it an offense to hydraulically fracture a well. Since then further protests were held when MLAs were invited to tour shale gas fields in a rural area near Penobsquis on Dec. 4.

On Dec. 13, the three hours allocated for debate of Opposition bills was not enough time to vote on Bill 3. One MLA suggested to the NB Media Co-op that the government had purposely used up considerable time making lengthy statements in the Legislature about the pay equity bill so that not enough time would be left to vote on the fracking bill.

Speakers for Bill 3 included Green Party leader David Coon, MLA Fredericton South. Coon referenced the UN Secretary General at the COP24 climate change conference in Poland who was quoted saying: “Failing to agree on climate action would not only be immoral but suicidal.” Coon added: “The Premier talks about wants and needs. While Irving Oil may want fracking, it’s not something New Brunswickers need at all.”

Coon referenced the 5th edition of a comprehensive report, Compendium of Scientific, Medical, and Media Findings Demonstrating Risks and Harms of Fracking, by the Physicians for Social Responsibility and the Concerned Health Professionals of New York. The 266-page report reviews more than 200 peer-reviewed studies, most of which demonstrate the health and environmental harms and risks of fracking. He urged the MLAs to inform themselves of the scientific evidence of the harms and risks to water, health, public safety, climate stability, seismic stability, community cohesion, long-term economic viability, “and of course, in our province, to civil stability.”

Kent South MLA Benoit Bourque, Liberal, the Opposition critic for energy and resource development, referenced the 2013 confrontations and protests against fracking in Kent County. He stated that the emotional response to fracking must be considered in addition to the scientific evidence. Noting that the government continually references the revenues that fracking would generate, Bourque stated: “It’s nice to have money, but if we don’t have our health, what is it good for?” He confirmed that the Liberal caucus would vote for Bill 3 to uphold the moratorium.

Megan Mitton, Green MLA for Memramcook-Tantramar, read a statement by Chief Rebecca Knockwood of Fort Folly First Nation in Mitton’s riding. Knockwood stated that the condition of Indigenous consent for lifting the moratorium has not been met, and “fracking cannot proceed in our territory without our consent.” Knockwood explained that her ancestors have been stewards of their territory for thousands of years. She said the Mi’kmaq are deeply concerned about the impacts hydraulic fracturing may have on the “lands and waters of our territory and on the fish, animals and plants that we rely on for our sustenance, our cultural and spiritual well-being.” Knockwood continued: “Water is sacred and anything that pollutes our lands and waters is like a knife to the heart of mother earth.”

After Mitton finished reading Chief Knockwood’s statement, the Legislature moved on to other business and Opposition Day was over without the vote being called on Bill 3. Earlier in the week, the PC government had decided that at the end of business on Dec. 14, the Legislature would be in recess until March. Until then, MLAs will be engaged in committee work.

The Legislature will resume sitting on March 19, and March 21 is the first Opposition Day when discussion could resume on Bill 3 to keep the fracking moratorium in place. Until then, the government can lift the moratorium without a vote in the house. Premier Higgs has previously stated that the amendment to the throne speech passed on Nov. 30 gave him the green light to exempt communities in and around the town of Sussex from the moratorium.

The NB Anti-Shale Gas Alliance Facebook page has updates on the campaign to keep the moratorium in place. NBASGA collaborated with the Conservation Council of New Brunswick to prepare an information page about shale gas with an online form to send a letter to your MLA and the Premier to express opposition to fracking.

First reading of a bill to improve tenants’ rights

Also on Dec. 13, David Coon introduced Bill 10, an Act to Amend the Residential Tenancies Act. A statement by the Green Party explained that the bill will ensure that tenants across New Brunswick will improved safeguards in rental housing.

“If the Act to Amend the Residential Tenancies Act is adopted, our most vulnerable tenants will enjoy the same level of protection and support available to other Canadians,” said Coon, the Green Party leader and MLA for Fredericton South. “Tenant rights and safety should, and need to be, a priority.”

Bill 10 would require landlords to include an estimate of average heating costs along with the rental costs in the lease, limit rent increases to once per 12-month period and allow for early termination of leases in certain safety and health-related circumstances including in cases of domestic violence.

Similar to the fracking moratorium bill, March 21 is the earliest date this one can be debated in the Legislature.

Susan O’Donnell is a member of the NB Media Co-op editorial board.

Opposition Day at the Legislature: Pay equity and fracking debated