On 26 September, three people were jailed for 15 and 16 months for opposing fracking. As part of the protests at the Preston New Road fracking site, they climbed on top of lorries delivering equipment to the site and stayed there for four days.

Many believe that the sentences were supposed to act as a deterrent. But it isn’t working. On 1 October, protesters erected tripods and locked themselves together to stop work at the site. And 27 hours later, the blockade was still going strong:

Yesterday’s peaceful action at the gates of Cuadrilla’s unwanted #fracking site is still going on this morning! #WeSaidNohttps://t.co/WZ2kkTFLk4

There is widespread support for the action, including from Green Party peer Jenny Jones:

Yay! Brilliant action on behalf of us all. No #fracking for us! https://t.co/2zGZ6wYp4G

Wow. Day 2 of an epic anti-#fracking lock-on. One tripod still intact, with 4 people on the ground. 28 hours of peaceful actions is amazing.

When democracy fails & corruption prevails, this is all we have left, @claireperrymp. #WeSaidNo#ScienceSaysNo#UntilWeWinpic.twitter.com/gQiFgL6rEV

And as others pointed out, the prison sentences “made us stronger”:

By giving three of the #FrackFreeFour prison sentences, the court thought it could deter activists. Instead it has made us stronger.

Solidarity to those who have locked on to prevent #frackinghttps://t.co/7I4krCFEzS

Perhaps most importantly, the action was also effective:

Update from Gate Camp Pixies:
Police still cutting the lock-on on top of the tripod. Other lock-ons below will remain overnight. This action prevented a large convoy being delivered this morning.
Folk have sacrificed their liberty in solidarity with #FrackFreeThree
📷 = Katrina pic.twitter.com/gdxKKbUKGQ

Resistance is also growing to oppose the sentences handed out to the protesters. An open letter from academics at Sussex University calls for a Judicial Review into the sentencing and states:

The ruling sets a worrying precedent, curtailing opportunities for the kind of public protests that have historically been effective in instituting the legal and policy changes that defend our environment for our future generations. We need more, not less, space for action to confront unsustainable industrial practices that harm our communities and perpetuate our reliance on fossil fuels.

Meanwhile, a range of people from politicians to lawyers are speaking out. Shadow chancellor John McDonnell tweeted:

Writing in Huffpost, one of the defendants – Simon Roscoe Blevins – stated:

As a soil scientist I know that fracking poses a great threat to the ground beneath our feet through leaks and contamination. Soil takes thousands of years to form, but its health can be lost in an instant. We depend on healthy earth for our food and water – it is the bedrock, literally of our existence. That’s why I decided to join this protest.

So I have one ask of you, which will give me hope as I sit in jail. If you share my concerns and intentions, then please find your local anti-fracking group and continue this fight.

It’s down to all us to support that fight. From supporting the prisoners and letting them know we are thinking of them, to taking action against fracking, the struggle can and will continue.

– Write to the prisoners and let them know you’re thinking about them.

– Support Frack Off and find out what’s happening in your area.

– And support protesters at the Preston New Road. 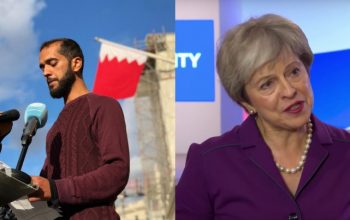 Tens of thousands have died in the name of austerity. A senior Tory’s response is utterly despicable [VIDEO]

Trump is President, but Americans didn’t actually vote for him [VIDEO]

Amid all the talk of a ‘Green Brexit’, the biggest threat to our environment is not being addressed

The media is ignoring France’s mass protests, but their spirit is spreading (TWEETS, VIDEO)