Before the Democratic Senatorial Campaign Committee endorsed former Colorado Gov. John Hickenlooper in a 2020 Senate race, it pressured consultants from at least five firms not to work with a leading progressive in the race, the candidate told The Intercept.

Andrew Romanoff, who is one of more than a dozen candidates vying for Republican Sen. Cory Gardner’s seat, told The Intercept that multiple consultants turned down jobs with his campaign citing pressure from the DSCC.

“They’ve made it clear to a number of the firms and individuals we tried to hire that they wouldn’t get any business in Washington or with the DSCC if they worked with me,” Romanoff said. “It’s been a well-orchestrated operation to blackball ragtag grassroots teams.”

At least five firms and 25 prospective staff turned down working with his campaign, said Romanoff, who has raised more than $1 million in individual contributions so far. “I spoke to the firms, my campaign manager spoke to the staff prospects,” he said. “Pretty much everyone who checked in with the DSCC got the same warning: Helping us would cost them.”

A consultant who spoke to The Intercept on the condition of anonymity said that their firm had been far along in talks to work for Romanoff when they got word that Senate Minority Leader Chuck Schumer and the DSCC weren’t happy. The firm was told by a top DSCC staffer that they “absolutely under no circumstances could work for Andrew Romanoff, so we withdrew our offer to be his consulting firm.”

The DSCC is using an “unquestionably far more heavy-handed approach this year than they have in previous cycles,” the consultant said.

Earlier this year, the DSCC’s companion organization in the House, the Democratic Congressional Campaign Committee, made it official policy to cut off funding and vendors to Democrats who challenged incumbent Democrats. Putting the policy in writing ratcheted up what had been more of an informal understanding in prior cycles. But if the DSCC’s intervention in Colorado is any indication, the Democrats’ Senate campaign arm is taking the blacklist one step further, by discouraging consultants from working not only for challengers to incumbent Democrats, but also for progressives running against the establishment’s preferred candidate in a seat currently held by the GOP. In Romanoff’s case, the DSCC did so before it had been clear whether Washington’s choice, Hickenlooper, even planned to run.

It’s still early in the cycle, and while some candidates are getting their Senate campaigns off the ground, others are still deciding whether to jump in. Individuals connected to a handful of campaigns across the country said they’ve heard about interventions by national Democrats, either in the form of the DSCC pressuring consultants not to work with progressive candidates, or Senate Minority Leader Chuck Schumer telling people not to run for office in the first place.

“First they came for the House candidates; now they’re gonna come for the Senate candidates,” said Heather Brewer, who is managing the Senate campaign of New Mexico Secretary of State Maggie Toulouse Oliver, a progressive who was snubbed by the DSCC, which made an early endorsement of Ben Ray Luján, a member of House Democratic leadership. “It’s not rocket science to see where this is heading.”

Schumer’s office directed questions to the DSCC, which is officially run by Nevada Sen. Catherine Cortez Masto, but known to be controlled by Schumer, whose piloting of the committee in 2006 and 2008 reclaimed the Senate for Democrats and then gave them a brief filibuster-proof majority. “We do not have a policy of preventing firms from working with candidates,” a DSCC spokesperson told The Intercept in an email. “In our role as a campaign committee focused on winning Senate seats, we have ongoing conversations with strategists and advisers about battleground races.” 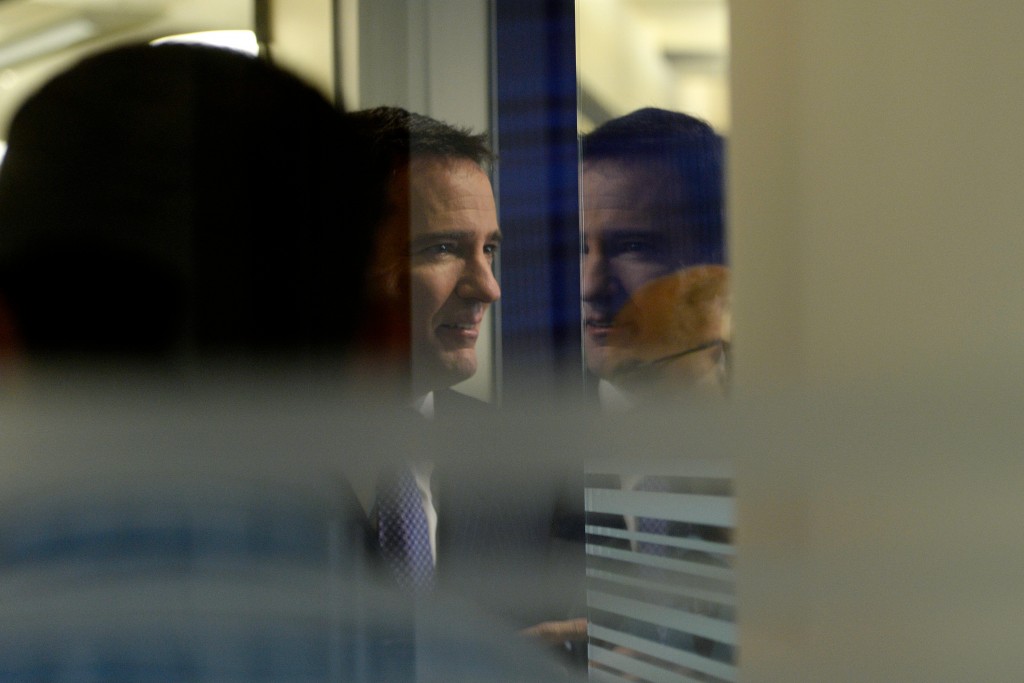 Then-Democratic candidate Andrew Romanoff talks to guests after debates on Oct. 30, 2014, at the Univision Colorado studio in Denver, Colo.

On August 23, months before the Democratic primary, the DSCC endorsed Hickenlooper, who dropped out of the presidential race on August 15 and announced a Senate bid a week later. Notably, Hickenlooper is one of the more conservative candidates in the race. The former governor championed fracking during his tenure and as a presidential candidate came out against Medicare for All and the Green New Deal. Romanoff, meanwhile, is backing both of those policies and has sworn off corporate political action committee money. The DSCC backed Colorado Sen. Michael Bennet, another Democratic presidential candidate, over Romanoff in the state’s 2010 Democratic primary.

The DSCC’s early endorsement in a race with no Democratic incumbent didn’t go over well with Colorado party officials, who, in internal emails published by the Denver Post on Tuesday, described the DSCC’s immediate decision to back Hickenlooper over 11 other candidates as a “slap in the face.”

Six of the seven women candidates running in the Colorado primary sent a letter to DSCC leadership on Monday, Women’s Equality Day, urging it to reconsider its endorsement of Hickenlooper. “All of us, like many women in Colorado and across the country, have seen well-qualified women passed over for male candidates in the workplace time and again,” they wrote.

In a Hill TV interview with Krystal Ball, presidential candidate Sen. Bernie Sanders echoed progressives’ frustration. “I think you let it play out,” he said of the DSCC’s endorsement of Hickenlooper. “This is obviously a major debate within the Democratic Party. Those who think that so-called centrist candidates backed by folks who have a lot of money may be able to win over some moderate Republicans — that is the future. I disagree. The future of the Democratic Party is to greatly expand the base, increase voter turnout, especially with young people, speak to the needs of working people. I believe there are some people who voted for Trump who, in fact, if given the option of a progressive agenda, will vote with us.” 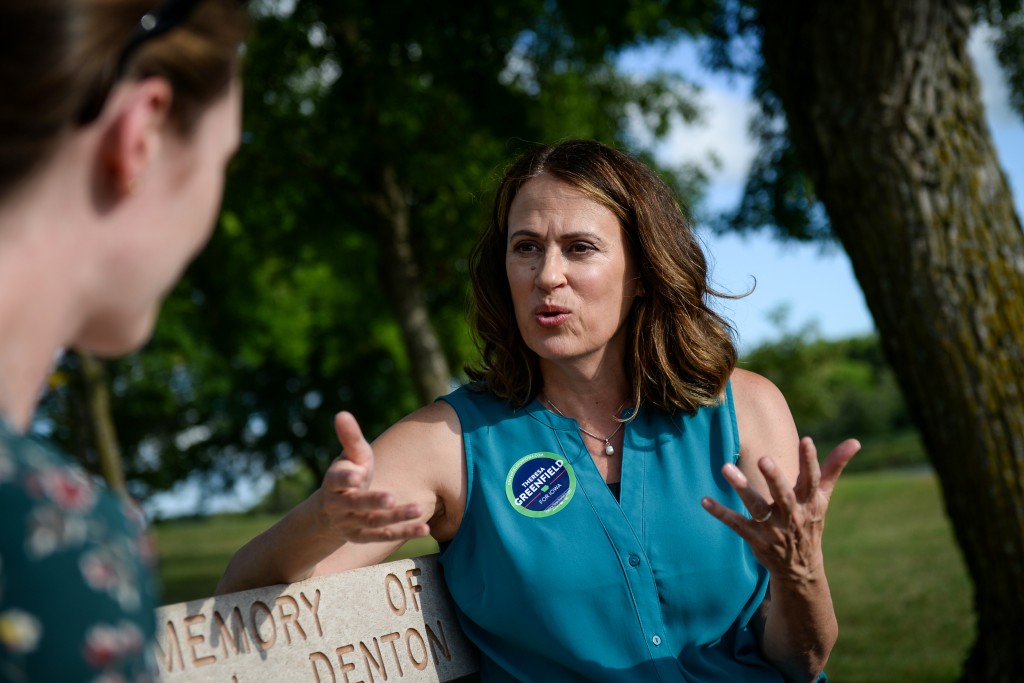 Democratic Senate candidate Theresa Greenfield speaks with a reporter at a picnic hosted by the Adair County Democrats in Greenfield, Iowa, on Aug. 11, 2019.

Candidates’ experiences with the DSCC have been mixed. One consultant who spoke to The Intercept on the condition of anonymity said they’d recently worked with a contractor who had consulted with the committee about working with a particular candidate. The DSCC told the contractor that it didn’t care who they were working for, because it had already settled on a different candidate, whom Schumer was encouraging to enter the race.

Still, there have been other instances of Senate Democratic leadership trying to tip the scales. In Iowa, where the DSCC is backing Theresa Greenfield, Time Magazine reported earlier in June that Schumer had advised J.D. Scholten, who challenged Rep. Steve King in a House race last year, not to run for Senate.

“We don’t need a primary,” Schumer told Scholten in a phone call, Time reported. Scholten, who lost to King by less than 3 percentage points, confirmed Schumer’s comments to The Intercept, but clarified that it wasn’t “forceful at all” because Scholten was already more inclined to run for King’s seat in Congress. “It was when Schumer called me to mention that they were gonna be backing Theresa [Greenfield]. I said, well, that doesn’t necessarily deter me, and then he made the comment,” Scholten said.

North Carolina state Sen. Erica Smith, who’s leading the latest polls in her bid against Republican Sen. Thom Tillis, said she has reason to believe that the DSCC is doing similar things in her race. The committee told her that it isn’t yet endorsing in that race, and that it’s not helping any candidates fundraise — but there are whispers that the DSCC might support her potential primary opponent Cal Cunningham, whom it has backed in the past.

“It seems clear to me that there is a question of integrity or lack thereof,” Smith said. “This brings to question who’s telling the truth. And there’s an appearance to me that Senator Schumer is trying to purchase — trying to buy a U.S. Senate seat in North Carolina. That is not going to go well for the constituents that I serve. And I am very much opposed to that. New York and North Carolina are extremely different.”

Smith’s campaign manager Jonathan Lucas said he had been directly pressured by people he described as veteran, well-connected establishment Democratic operatives in North Carolina not to work with Smith, and that he’s faced similar pressure in years past while working on other races in the state. Given the makeup of Cunningham’s donor-base, Lucas believes that pressure originated from the DSCC and Schumer, because a significant portion of Cunningham’s donors have links to the Senate minority leader.

“I had a number of influential ‘establishment’ Democrats tell me it was a mistake to work for her, she will never be the nominee, etc.,” Lucas said in a statement, referring to Smith. “Well, I have never been an establishment consultant. I met her and I am not only convinced she will win, but that she is exactly the type of candidate that we need right now. One that Schumer and the establishment fear because her vote is not for sale.”

The post Senate Democrats’ Campaign Arm Is Pressuring Consultants Not to Work With Leading Progressive Candidate in Colorado appeared first on The Intercept.