Stop Big Oil From Dumping Wastewater Into Rivers And Streams 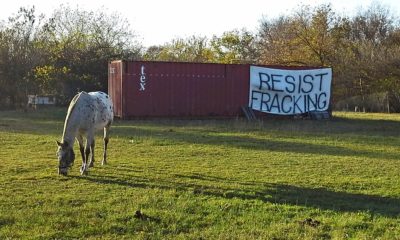 Big oil companies are considering dumping potentially dangerous wastewater, a largely under-researched and chemically complex byproduct of drilling and fracking, into rivers and streams. This wastewater, deemed “produced water” by the industry, is produced in large volumes. Texas, Oklahoma and New Mexico have seen a recent boom in the fracking industry and produced a whopping 270 billion gallons of wastewater in 2017. Due to the excess of produced water, these three states are at risk of contaminating their waterways if the EPA and state governments issue permits to dump.

This comes after a crackdown on regulations limiting underground wastewater disposal, particularly in Oklahoma. The common method of injecting wastewater into highly-pressurized, underground tanks was directly linked to earthquakes that increased by 900-fold since 2008, when fracking became popular in Oklahoma. Regulations have resulted in a decline in earthquakes, but have left oil companies largely unsure of what to do with the produced water.

East of the 98th Meridian, a geographical line that runs down the middle of Kansas, Texas and Oklahoma, oil and gas companies are allowed to release wastewater into streams and rivers, so long as it runs through a centralized treatment plant. West of the meridian, however, which includes half of Texas, Oklahoma and all of New Mexico, companies can dump produced water into rivers and streams without treatment if they have a permit.

Due to the fact that the majority of wastewater has been disposed of in sealed tanks, there is little data surrounding the chemicals and contaminants that exist in produced water. Research done by the Environmental Defense Fund, Texas A&M University and the Endocrine Disruption Exchange found that more than half of the chemicals identified in produced water have not been studied for safety or toxicity and 86 percent lack the data needed to complete a risk assessment. In addition, studies in Western Pennsylvania have shown that running wastewater through a centralized wastewater plant does not eliminate harmful chemicals. Researchers at Pennsylvania State University found high levels of radium, a carcinogenic chemical, in water that had been treated. Other harmful chemicals and metals have been found in wastewater, including benzene and lead. Many, still, are unknown.

Sign below and demand that the government keep this dangerous wastewater out of rivers and streams until further research can be done.

Releasing produced water with thousands of toxic and unknown chemicals into our rivers and streams could have severe ecological and health consequences without the proper research. We cannot continue to risk human health and the well being of our fragile ecosystems in the name of corporate industry. If we release chemicals such as lead and radium into our waterways, we will never be able to take that back.

I urge you to fund extensive research on the chemicals and composition of wastewater before allowing state governments to issue permits to dump. In addition, I urge you to strengthen regulations on the type of water than can be released from centralized treatment plants. Higher-than-normal levels of radium in our water as a byproduct of fracking is unacceptable.