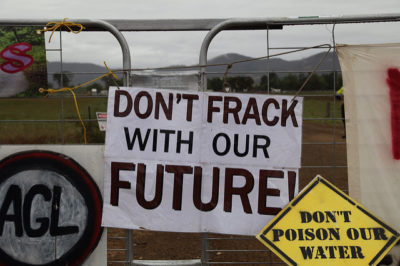 Target: The Right Honourable Theresa May, Prime Minister of the United Kingdom

Goal: Support the continued battle to end all fracking in the UK by strengthening and adding laws.

With the resignation of fracking tsar Natascha Engel and the sharp rise in public awareness, environmental protests against fracking may finally put the industry down for good. Almost none of the major political parties across the UK support fracking. Unfortunately, the industry continues to push its agenda as it tries to argue the supposed good points to the dangerous practice.

There are no good points to fracking, speaking from environmental and safety standpoints. The fumes released from the gases poison the air, harming humans and local wildlife alike. The forceful activity has caused many earthquakes and tremors. The high-pressure fluids used can leak through pipes, contaminating groundwater. The only supposed positive is monetary gain for gas companies, money that does not benefit the country as a whole.

The fracking industry is so close to being shut down for good, and we cannot let anything hold back a more environmentally sound future. Sign this petition to strengthen existing anti-fracking laws and add new ones.

The fracking industry may soon be a thing of the past due to the resignation of the fracking tsar and the rise in public awareness. Unfortunately, the industry continues to fight to stay in business, insisting that fracking is beneficial to the country. In reality, fracking provides no benefits other than monetary gain for the industry. It is extremely harmful to the environment and living creatures.

You must strengthen existing anti-fracking laws and regulations, as well as create new ones wherever possible. Fracking has done too much damage to the country as it is. Do not allow any loophole abuse among the industry, keep the laws as tight and strict as possible and ensure that the dangerous practice will never again be permitted.