In an email his campaign blasted out on Tuesday, Cruz wrote: “I just got off the phone with a few very generous supporters who — after our big win in Iowa last night — have pledged huge support for my campaign.”

The donors “have agreed to match all online donations to my campaign made through the links below,” he said. The page he linked to allowed supporters to give up to $5,400 ($2,700 for the primary election; $2,700 for the general election) and, for a 48-hour period, have their donations matched dollar for dollar.

The email did not say exactly how that would work. 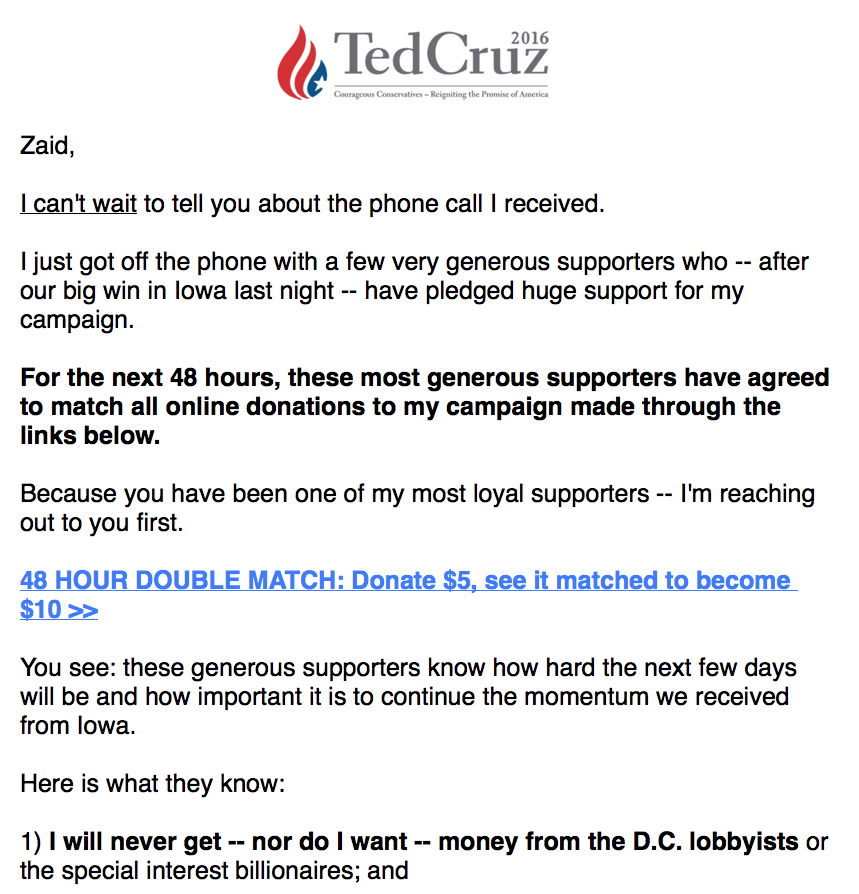 Email sent out Tuesday from ted@tedcruz.org.

Campaign finance experts, however, say there’s no way Cruz could be doing exactly what he promised without violating the law. That’s because there’s no way “a few very generous supporters” could legally be matching a large number of contributions to the campaign.

The operative rule is that individual donations to campaigns are legally capped. “If this money is going to his campaign, any one of those donors can only give a maximum of $2,700 [per cycle] including any money they have given before,” said Fred Wertheimer, a campaign finance expert at Democracy 21.

Many of Cruz’s most “generous donors” have presumably already hit that limit, which is called “maxing out.”

“I don’t know what he’s doing or how he’s doing it, but the only way that I could imagine he could be doing it that’s legal is if he’s got a bunch of not maxed-out donors who are willing to match the contributions of others until they themselves max out at $2,700,” said Paul Seamus Ryan, deputy executive director of the Campaign Legal Center.

Richard Skinner, a policy analyst at the Sunlight Foundation, speculated that the Cruz campaign could perhaps have lined up a conference call with “like a hundred contributors who have not maxed out.” In that scenario, if each one could still give $1,000 and remain below the cap, they could match $100,000 in donations — but that would be all, and Cruz didn’t say there was a limit beyond which donations would no longer be matched.

Rick Tyler, a Cruz campaign spokesperson, said that he was only “vaguely familiar” with the program, but “you have to get multiple people to agree to do it.”

He then emailed me the following statement: “I am not going to get into specifics about the performance of our match program. Suffice is to say it meets compliance standards for reporting. We have enough donors to match new contributions under the program. This program has been widely used successfully by many campaigns.” He pointed me toward similar email campaigns, including one just the other day from fellow Republican presidential candidate Marco Rubio. The Democratic Senatorial Campaign Committee actually offers a triple match.

But if Cruz is telling the truth about the match being covered with only “a few very generous donors” he spoke to on the phone, the only way that could work would be if his campaign is either ignoring the campaign donation limit — or the donors are giving the “matching funds” money to a Cruz-affiliated Super PAC.

Neither of those would be remotely legal.

After recent Supreme Court decisions such as Citizens United and SpeechNow — and with the Federal Election Commission almost totally paralyzed by its three Republican members — there isn’t much operative campaign finance law left on the books. Super PACs, for instance, are allowed to accept unlimited contributions as long as they don’t coordinate directly with campaigns. But it seems that every campaign, with the exception of that of Bernie Sanders, is constantly finding new ways to weasel around that restriction.

One of the few rules still standing, however, is that $2,700 limit to campaign giving. Another is that federal candidates are not allowed to solicit more than $5,000 in Super PAC contributions from any one person.

“If it is not a large pool of donors, if it is truly just a few generous supporters, it does appear that taking him at his word … his strategy runs afoul of the law one way or the other,” Krumholtz said.

The rule about solicitation is outlined in an FEC advisory opinion from 2011. According to the federal statute in question, which dates back to the McCain-Feingold soft money ban of 2002, “a candidate, individual holding Federal office, agent of a candidate or an individual holding Federal office … shall not … solicit, receive, direct, transfer, or spend funds in connection with an election for Federal office, including funds for any Federal election activity, unless the funds are subject to the limitations, prohibitions, and reporting requirements of this Act.”

And there’s no wiggle room. “To direct,” according to federal regulations, “means to guide, directly or indirectly, a person who has expressed an intent to make a contribution, donation, transfer of funds, or otherwise provide anything of value, by identifying a candidate, political committee or organization, for the receipt of such funds, or things of value.”

To solicit “means to ask, request, or recommend, explicitly or implicitly, that another person make a contribution, donation, transfer of funds, or otherwise provide anything of value.”

According to Ryan of the Campaign Legal Center, “If the matching contributions by Senator Cruz’s ‘very generous supporters’ are going to a Super PAC and exceed $5,000 by any one supporter, Cruz is violating the federal law that prohibits candidates from soliciting or directing soft money to Super PACs.”

And it’s hard to imagine Cruz denying he played a part. “The problem there would be that he was on the phone call, strategically planning this campaign,” said Krumholtz. “How do you walk that back?”

Cruz could be counting on the fact that the FEC won’t rouse itself even for such a blatant violation.

“As long as you think there is going to be no enforcement of the law, it’s just up to each political operative or campaign to decide what they want to do,” Wertheimer said. “It’s a voluntary system, the way the FEC treats it.”

Of course, there’s one other possibility: that the whole thing is just a fake marketing gimmick, a scam.

The web page the campaign email linked to, with a box for $5,400 checked.

Cruz ended the email with a definite whopper. He told his email subscribers that he will “never get — nor do I want — money from the D.C. lobbyists or the special interest billionaires.”

That would be news to billionaire Robert Mercer, the New York hedge funder who originally met Cruz at a meeting of the Club for Growth, a prominent D.C. special interest group, then gave $11 million to Keep the Promise, a Cruz Super PAC.

Another billionaire, energy investor Toby Negegebauer, gave $10 million to one of Cruz’s Super PACs. Farris and Dan Wilks, two billionaire brothers who were enriched by the Texas fracking industry, gave $15 million to a Cruz Super PAC.

As for Cruz’s pledge that he has never received money from D.C. lobbyists, that’s also demonstrably false. A number of lobbyists have given to his campaign for a total of $5,700, according to Opensecrets.org.

They include James Hyland, the president of the Pennsylvania Avenue Group, which instructs visitors to its website: “Even if you are unsure if you need our lobbying assistance, make an appointment to discuss your options.”

There’s also Ed Rogers, chairman of the lobbying powerhouse BGR Group; Andrew Biar, the founder of Strategic Public Affairs; Jewell Patek, owner of Patek & Associates; and Joseph Mondello, principal of the Mondello Group, who was recently arrested after a worker who failed to fix his computer told police that Mondello became enraged, told him, “You’re not leaving until you fix this,” then pulled out a gun and said, “I’m going to kill you slowly.”

Overall, however, Hillary Clinton’s campaign has received far and away the most donations from lobbyists, with Jeb Bush and Marco Rubio as her nearest competitors.

The post Ted Cruz’s Promise That Big Donors Will Match Campaign Donations Could Break Rules appeared first on The Intercept.