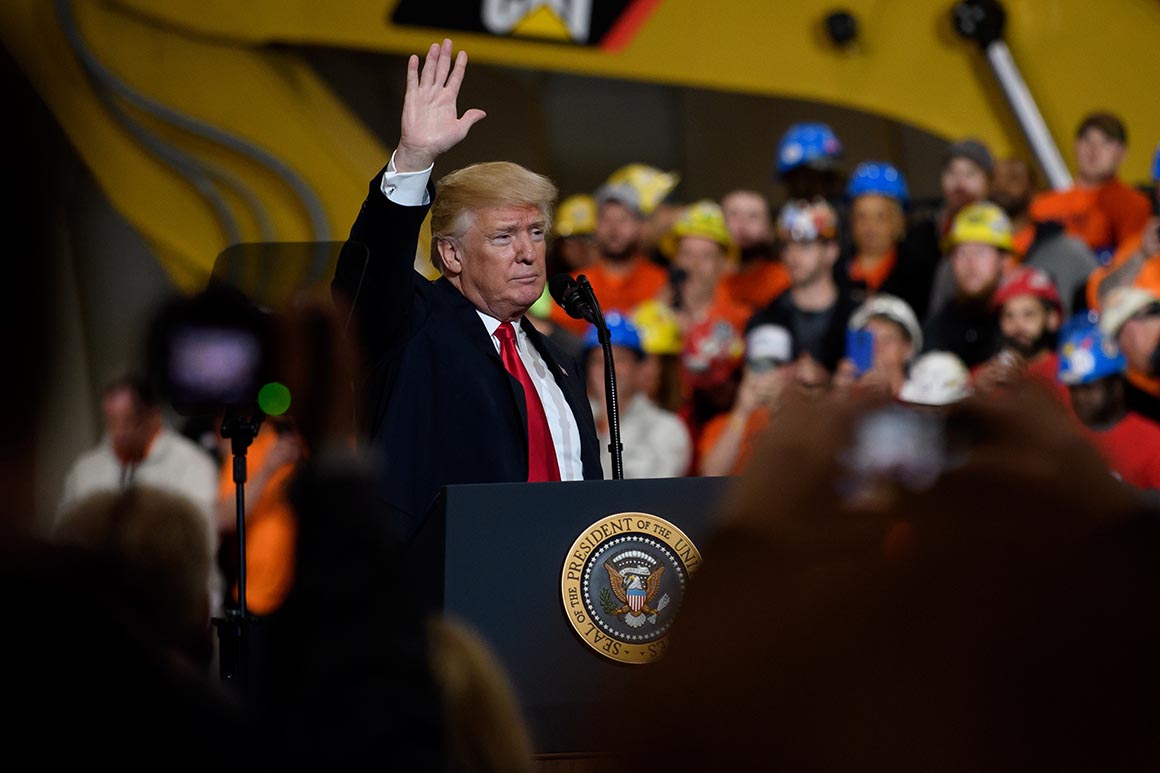 Chuck Knissel, a fourth-generation coal miner from small-town West Virginia, was dismayed when Hillary Clinton told a group of Ohio voters in 2016 she planned “to put a lot of coal miners and coal companies out of business” if elected president — a comment Clinton later said she regretted more than any other on the campaign trail.

So when Democratic presidential candidate Joe Biden declared at a primary debate this summer that he would eliminate fossil fuels, coal and fracking as president, Knissel said he “couldn’t believe what I was seeing.”

“I was like, ‘Could you not see how devastating that was for Clinton?’ It was an albatross. That sealed the deal for anyone who had any questions about her,” said Knissel, a union officer for the United Mine Workers of America who said he won’t support Trump in 2020, but worries the current 2020 Democrats are repeating past mistakes. “They’re pro-union, but anti-coal. They say, ‘We’ll support you, but we’ll just find you another occupation,’ and that’s not going to happen.”

The Trump campaign hopes to seize on that kind of discomfort among disaffected workers — whether coal miners or striking General Motors employees — in its bid for reelection. The president found Reagan-like support with blue-collar workers in 2016, but needs to further dominate the union vote next fall to compensate for the suburban slump he’s already facing. Right now, he is banking on a strong economy to do that — saying current economic conditions preserve jobs that might otherwise be threatened by automation and environmental regulations under a Democratic administration — even as many of the workers he’s after are suffering through a manufacturing slowdown under the weight of his trade war.

If Trump fails, allies fear his popularity in the Rust Belt will crumble, triggering a cascade of losses across the industrial Midwest that can only be offset by victories in Florida and an unusual collection of traditionally blue states.

Campaign officials are in the early stages of assembling a “workers coalition” to be rolled out before the end of the year that will feature rank-and-file workers and labor leaders who are sympathetic to the president’s trade policies and deregulatory agenda. At his campaign rallies, Trump will turn up the pressure on Congress to pass his North American trade deal after months of leaving the heavy lifting to Vice President Mike Pence. The agreement, known as the USMCA, has so far been met with mixed reaction among organized labor, where concerns about its enforceability remain a top concern.

In their own attempt to help the president connect with union workers, White House officials recently stepped into discussions around the United Auto Workers walkout against General Motors — the first time the company has faced a major strike in more than a decade. Top Trump officials are pushing for a deal that would reopen a GM plant in Lordstown, Ohio, as POLITICO first reported Tuesday.

Others close to Trump’s reelection operation said the locations of his upcoming rallies will also reflect a push to broaden his appeal among workers in the construction, electrical, manufacturing and mining industries.

In Ohio, where about 640,000 workers belonged to unions last year, Trump advisers have sought advice from former campaign official and ex-Republican National Committee co-chair Bob Paduchik on where the president should appear to maximize his outreach to union households, according to a person familiar with those conversations. Paduchik did not respond to requests for comment, but wrote in a Labor Day op-ed for the conservative outfit Townhall that union members were “critical” to Trump’s 2016 victory and his campaign “will devote the time, energy, resources and attention to expand the coalition of rank and file union members who know a good job when they see one.”

Much of the Trump campaign’s effort to charm American workers over the next year is driven by its belief that the Democratic party’s shift in a more progressive direction has placed its long-standing relationship with the labor movement on the brink of collapse.

It’s a trend some labor leaders have recognized and warned Democrats about, urging them to take a more tactful approach to issues like trade, healthcare and climate change, and to painstakingly address the economic impacts of major policy proposals like the Green New Deal.

“Climate change and economic inequality are the two greatest threats to our way of life. Any solution for one also has to address the other. We have to do both, and we have to make sure working families are invested in that solution,” said John Weber, spokesman for the AFL-CIO.

AFL-CIO president Richard Trumka put it more bluntly in a letter this spring to both sponsors of the controversial climate-change resolution: “We will not accept proposals that could cause immediate harm to millions of our members and their families. We will not stand by and allow threats to our members’ jobs and their families’ standard of living go unanswered.”

Some Democrats have worked hard to ingratiate themselves with rank-and-file union members, instead of just courting their bosses. Their main goal: avoid a repeat of 2016, when Clinton carried union households by 9 points over Trump — a narrow margin when compared to the 20- and 18-point leads Barack Obama held in 2008 and 2012.

Biden, for instance, declared himself “a union man” during his first campaign rally of the cycle, which was hosted by the International Association of Fire Fighters. He has also distanced himself from his proposals by his opponents to end private health insurance or shift to a single-payer system, casting both moves as anti-labor and disruptive to hundreds of thousands of union members who have tirelessly negotiated their current benefits.

“I’ve been listening to a lot of folks in labor who have said to me, ‘Look, we negotiated contracts where we’ve given up wages for these health care benefits, and under the Medicare for All plan, we would lose them or we would be certainly in fear of losing them,” Sen. Kamala Harris (D-Calif.), another 2020 contender, told voters at a labor forum in Nevada.

Harris’ vacillations on health care have drawn repeated attention from the Trump campaign and other Republican critics. But it’s Biden’s comfortable support among the union crowd and his resulting strength in the Rust Belt — a Marquette Law School poll this month found the former vice president trouncing Trump 51 to 42 percent in Wisconsin — that most worries the president, according to one outside adviser who spoke with Trump recently.

The president was “apoplectic” when Biden nabbed the endorsement of the firefighters union and doesn’t want it to happen again before the Democrats select their nominee, this adviser said, adding that in the immediate aftermath of the Biden endorsement, Trump bragged to confidants that he’s capable of getting other unions to support him if he wants to.

But of the two unions that backed Trump in 2016 — the Fraternal Order of Police and the National Border Patrol Council — one hadn’t endorsed a candidate since President Bill Clinton ran for reelection in 1996, and the other broke with a longstanding policy against endorsements to support him.

It’s one of the reasons why those close to the president’s campaign dismissed Trump’s claim as improbable.

“I don’t think anyone would expect him to get any unions,” said another Trump adviser. “The problem is, even when the rank-and-file supports the president, the union bosses are all hardcore Democrats.”

Often, though, it has been Trump’s own policies and inaction inhibiting the growth of his popularity among union crowds. Promises to reform health care and pass historic infrastructure legislation have languished as the president has largely concentrated on immigration and plunged headfirst into culture-war politics. Trump’s union critics have also accused him of weakening collective bargaining rights, while propping up anti-union personalities. For instance, his latest nominee for Labor secretary, Eugene Scalia, was described by SEIU official Kyle Bragg as “an appalling joke made at the expense of working people everywhere.”

Combine those concerns with mounting fears of an economic downturn and critics say Trump is going to have a tough time convincing union households that he’s their guy.

For that reason, his 2020 campaign will ensure its workers coalition — which will join three other grassroots groups already focused on women, Latinos and African Americans — is sending union members “back into their communities and their neighborhoods to spread the word” about the president’s positive accomplishments, according to a senior Trump campaign official.

Asked how they plan to convince union members, whose bosses generally oppose Trump, to join the coalition, the same official said, “They just will. I don’t know how they will convince people to do it, but I know that there are people who are willing to do it just because they believe in the president so much.”

“This doesn’t mean every single union member that agrees to support the president has to have his or her name on a list, or be publicly identified,” the official added.

Knissel, the West Virginia union member, won’t be voting for Trump in 2020 no matter who comes knocking. The president’s inflammatory comments about immigrants are too much for him, and he’s disappointed in the administration’s efforts to rehabilitate the coal industry.

“With what I see every day in the news, I just can’t do it,” he said. “Our union was formed in 1890 and it was with people from all walks of life — Italians, Croatians, African Americans. Immigrants came together to form this union.”

“But if you look at the rank-and-file membership,” Knissel continued, “they’re really just looking for somebody — anybody — who saves them [and] saves their jobs.”