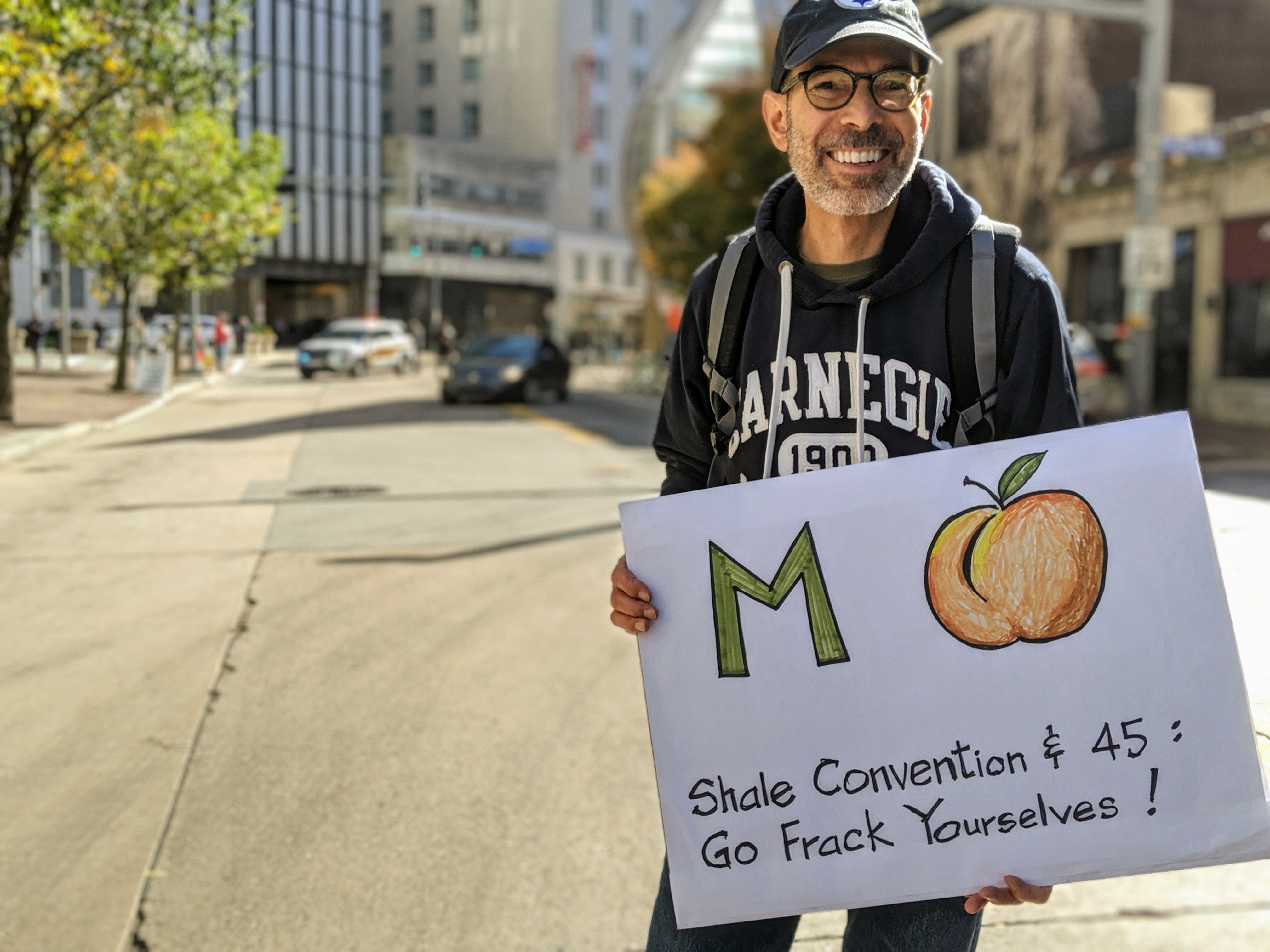 PITTSBURGH—On Wednesday afternoon, President Donald Trump spoke in support of fracking at the Shale Insight Convention here, where he praised the industry for creating jobs and giving America “energy independence.”

Trump was flanked by industry workers in neon safety vests and hard hats, but some steel union members took to the street instead, joining more than 50 Native American tribal leaders from across the U.S. and around 400 local protesters in a demonstration aimed at defending the region’s air, water, and land from pollution.

“We believe it’s not a question of good jobs or the environment,” Barbara White Stack, a 65-year-old member of the United Steelorker’s Union (USW) who attended the protest, told EHN while a tribal leader sang a native prayer song over the loudspeaker at the front of the rally. “It’s not one or the other. It has to be both. Workers and their families need a clean environment to survive.” 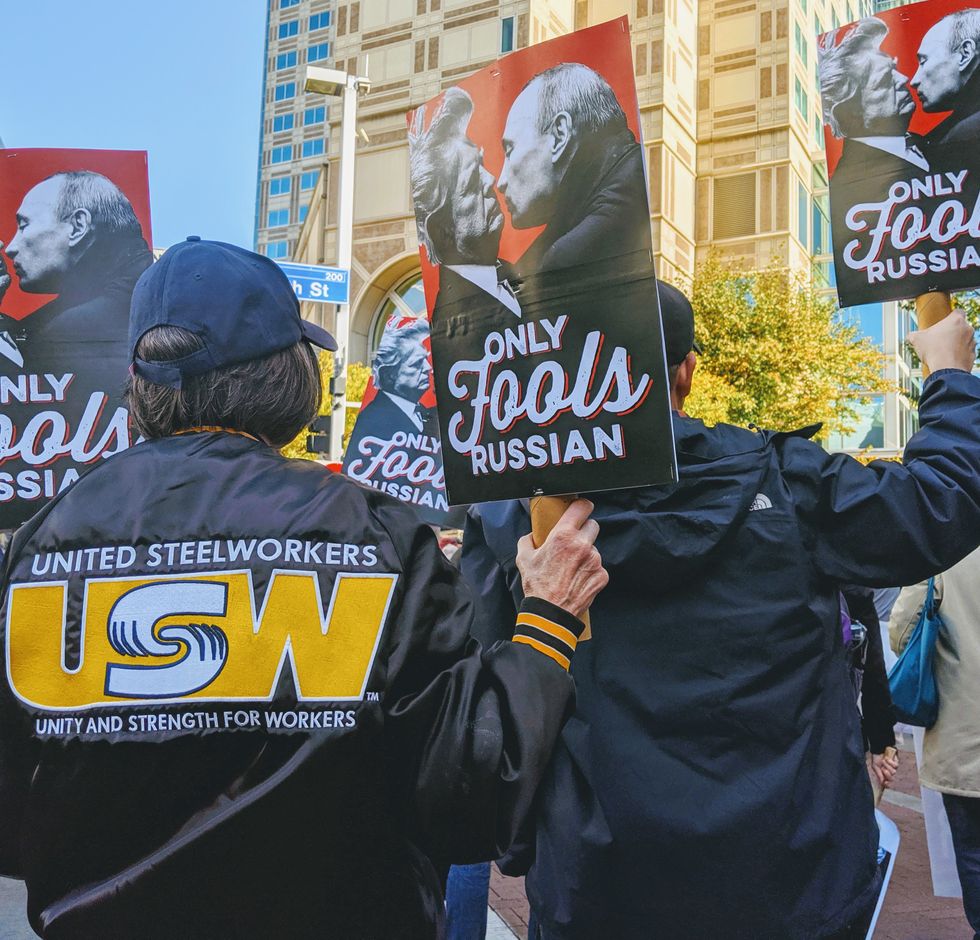 During a visit to Royal Dutch Shell’s petrochemical plant in Beaver County about 33 miles northwest of Pittsburgh in August, Trump was also flanked by U.S. Steel workers wearing safety vests and hardhats. That time, the workers had been paid to attend the rally.

White Stack said that she and other members of the USW were there to protest corruption, and the harm the Trump administration has done to unions and the environment. She pointed to the union’s partnership with the Sierra Club through the Blue Green Alliance as proof that there’s not an inherent divide between unions and environmental protections. 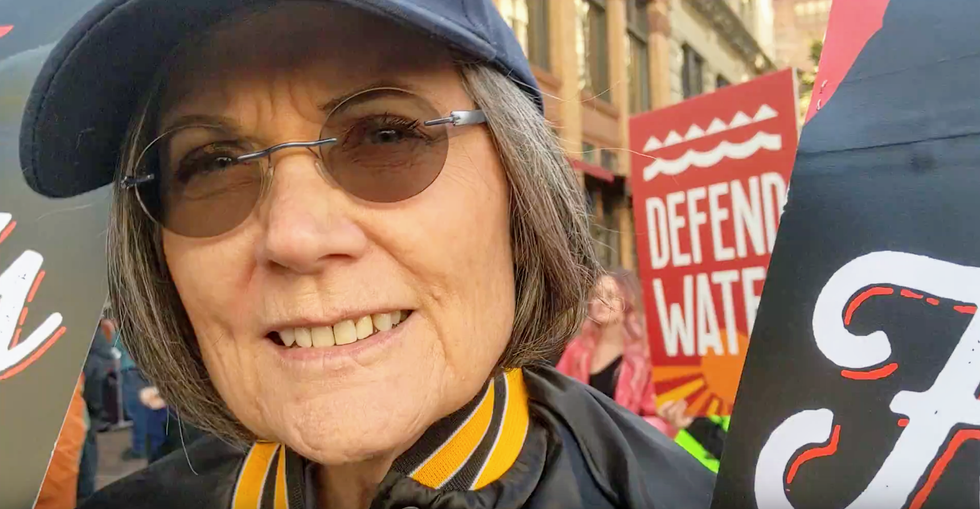 She added, “Admittedly there are steel workers that voted for Trump, but if you look at a lot of the policies the Trump administration has created through its National Labor Relations Board, those are very bad for workers, and I think a lot of union workers who voted for him realize those policies have damaged unions and damaged union power.”

One protestor disrupted Trump’s speech inside the venue and was removed. Trump told attendees, “Don’t hurt him,” with apparent sarcasm.

“If the waters are polluted, so are we”

Before marching to the rally outside the David L. Lawrence Convention Center where Trump was speaking, tribal leaders held a water ceremony led by Cheryl Angel, a Sicangu Lakota grandmother, at Point State Park where the Ohio, Monongahela, and Allegheny Rivers converge. Angel was heavily involved in the tribal protests against the Dakota Access Pipeline.

The water ceremony calls attention to the planned petrochemical buildout in the Pittsburgh region and the threat it poses to local waterways. If the Shell ethane cracker in Beaver County becomes operational—it’s currently still under construction—the plant will convert a massive volume of natural gas and liquids into 1.8 million tons of ethylene every year for use in plastics manufacturing.

It’s one of at least five such facilities being planned in the Appalachian basin region spanning Pennsylvania, Ohio, and West Virginia—four of which sit directly alongside the Ohio River or one of its tributaries. 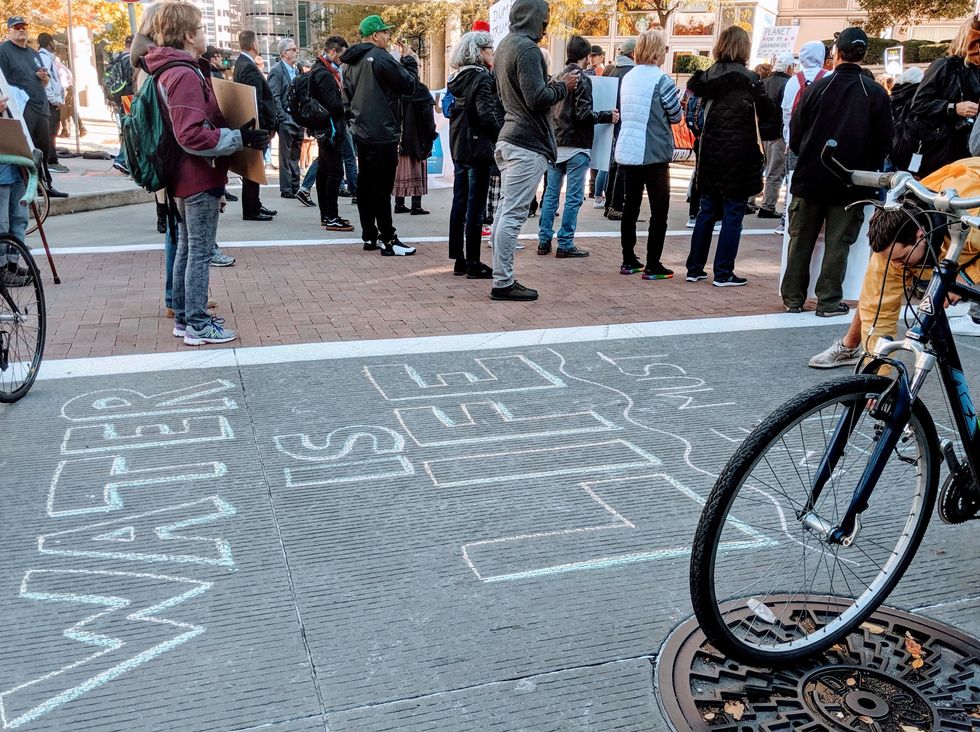 Each facility will demand natural gas liquids from an estimated 1,000 new fracking wells per year, according to estimates from researchers at Duquesne University. It was also recently revealed that ExxonMobil is scouting sites in Beaver County to build its own ethane cracker.

Residents have expressed concern that emissions from these facilities could turn the region into another “Cancer Alley,” like the one in Louisiana’s petrochemical corridor. Pittsburgh and the surrounding regions already have elevated cancer rates due to air pollution, and elevated levels of carcinogens in its drinking water as a result of the oil and gas industry.

During the hour-long water ceremony (which the leaders requested not to be photographed or recorded), sage was burned and sacred herbs were strewn on the ground and into the rivers.

Members of the crowd who’d brought small containers of water from the rivers, streams and tributaries near their homes formed a circle and commingled the water so it could be blessed and poured into the river, where armed U.S. Coast Guard boats patrolled nearby. One participant brought water from another water ceremony and said it contained water from five continents.

“The water ceremony recognizes that water is not just a life sustaining element that we draw and bring into our homes, but a ritual to honor our ancestors and say thank you,” Angel said in a statement. “Water is sacred. We become the vessels when we drink the water. If the waters are polluted, so are we; we are drinking a poison that leads to our demise.”

A similar event was held during last year’s Shale Insight Convention when acting EPA administrator Andrew Wheeler delivered the keynote. President Trump previously addressed the conference as a candidate in 2016. 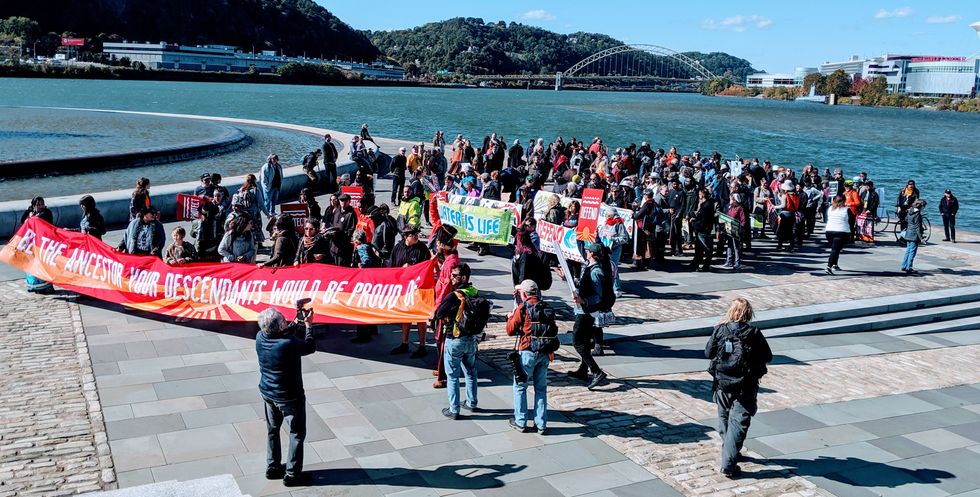 Around 1,500 people attended Trump’s hour-long speech at the David L. Lawrence Convention Center on Wednesday. Conference attendees, who paid up to $1,075 to attend the convention, sat close to the stage enjoying a plated lunch, while members of the public, who were invited to attend Trump’s speech at no cost, stood in the back of the room for the duration of his talk.

Trump’s arrival happened four days before the anniversary of the Tree of Life shooting, which left 11 people dead and seven injured during a Shabbat service in Pittsburgh’s Squirrel Hill neighborhood. Leading up to his visit, Jewish groups called on Trump to denounce the white nationalism that led to the tragedy, and on the day before his visit, 14 protesters were arrested for locking arms in a downtown intersection.

Immediately following the environmental rally, Women’s March protesters and Trump supporters filled the street outside the convention center. The opposing groups were kept separate by a line of police officers.

During his speech, Trump bragged about having repealed and weakened environmental regulations like the Clean Power Plan and about having pushed through pipeline permits. He promised to push against the fracking ban in New York, which is one of several states and a growing number of U.S. counties and foreign countries that have banned the practice over growing public health concerns.

He also reiterated his promise to withdraw the U.S. from the Paris Climate Agreement, repeating his famous line about being elected to represent “the people of Pittsburgh, not Paris.”

Pittsburgh Mayor Bill Peduto responded with a statement condemning those words, writing, “President Trump’s outdated vision for Western Pennsylvania and the Rust Belt would put the final nails into the coffin of those struggling communities his economy has left behind.”

Pittsburgh & Paris. Today, there are more jobs in clean energy in Pennsylvania than coal, gas & oil combined. In Pittsburgh, we’ve rebuilt our economy around tech, medicine, education & clean energy. We respect our past, but we build for our future. https://t.co/29v9w8KALq
— bill peduto (@billpeduto) October 23, 2019

Trump was also later criticized for telling the crowd at the convention that he planned to build a wall in Colorado—a state that doesn’t border Mexico.

A large number of students joined the tribal leaders, union workers and other protesters who gathered at the Point and marched to the convention center.

“I think this event today is a great bringing together of different identities and perspectives to try and address some of the issues at hand, especially drinking water and the assault on the environment by the petrochemical industry,” Prem Rajgopal, a graduate student in sustainable engineering at the University of Pittsburgh, told EHN.

Rajgopal is involved with the Fossil-Free Pitt Coalition, a student group working to get the University of Pittsburgh to divest from fossil fuels, and with the Pittsburgh chapter of the Sunrise Movement, an international initiative driven by young people working to stop climate change and create sustainable jobs.

He added that investing further in natural gas would tie the region to fossil fuel extraction far into the future. “We know that fracking has a lot of negative health impacts,” he said, “so we’re really trying to make sure our future has a clean and just environment for everyone.” 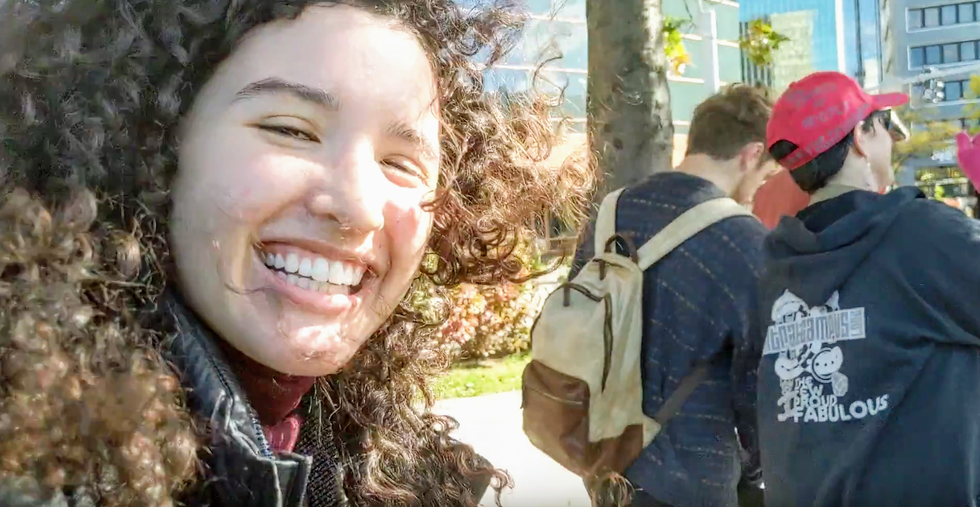 “Fracking is a process that uses a lot of harmful chemicals,” Mira told EHN. “They get into our drinking water, and methane gas and other harmful emissions get into our air, which leads to health problems like cancer, asthma, and birth defects. It’s an all-around awful practice that needs to be banned.”

Mira added that while the industry has touted natural gas as a “clean alternative,” fracking releases significantly more methane than other methods of extraction.

“Methane actually heats the earth more than carbon dioxide,” she said, “so by continuing this practice, we’re accelerating climate change and these disruptive weather patterns that are harming people all over the world.”